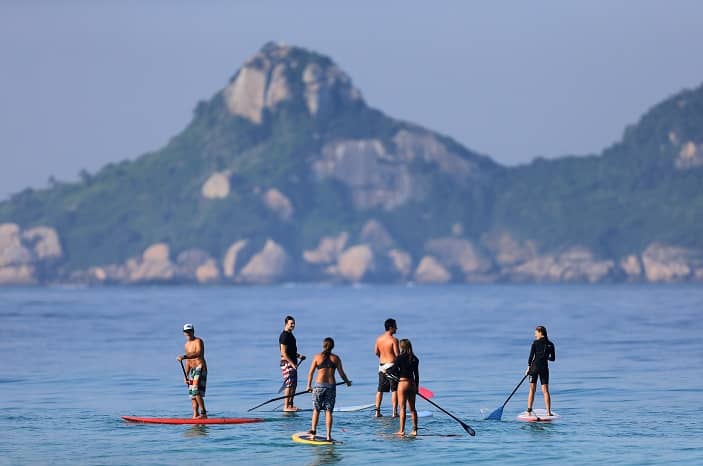 On the evening of 10 September, I found myself sitting with the founding members of 10 other UK tech start-ups at Heathrow’s Terminal 5 waiting for a flight to Sao Paulo, Brazil. Our companies ranged from social networks to content delivery networks to ecommerce solutions – but all had one thing in common. They had committed their limited time and resources to travel halfway around the globe to explore growth opportunities in one of the world’s fastest-growing markets. I represented 23snaps, a private social network for families, and hoped to learn more about the consumer appetite for our product and to find launch partners that would help us grow in the Latin American market.

There were shared pre-flight drinks and banter but also a sense of apprehension. Brazil is a tempting market for many businesses, with a consumer market growing exponentially in size, but the challenges that small companies face trying to enter the country act as a strong deterrent.

The 10-day trade mission, dubbed The Great Tech Expedition, was UKTI’s attempt to help one group of British tech start-ups overcome those challenges. The programme was also supported by the Mayor of London as part of the 2012 legacy efforts, as many of the companies participating on the trip hoped to pick up lucrative contracts related to Rio’s Olympic infrastructure and planning. The launch event included a meet-and-greet with Mayor Boris Johnson. It was an ambitious effort on the part of UKTI, but I returned to London with ambivalent feelings towards opportunities in the South American nation.

On the surface, the opportunities in Brazil are numerous. As the hosts of both the 2014 FIFA World Cup and the 2016 summer Olympic Games, the investment in infrastructure and need for goods and services can only increase.

Additionally, the Brazilian consumer market appears to be booming as well. Already the sixth largest economy in the world, over 75 million Brazilians are own smartphones. It’s ranked fifth in the world for number of internet users (over 90 million) and household spend has increased steadily over the last 10 years, including 2.5% growth from Q1 2013 to Q2 2013.

Brazilian companies can’t keep up with consumer demand, leaving room for international businesses to enter the market. Many of the participants on the UKTI trip were hoping to be first to market in their industry in this new, lucrative environment.

Meaghan Fitzgerald, head of marketing at photo app 23snaps (L), at the launch of the Great Tech Expedition to Brazil

But for all of Brazil’s potential, there are significant challenges to foreign companies entering the market – as we discovered shortly after being ushered into the UK Consulate on our first morning in Sao Paulo. A series of seminars, organised by the UKTI and the Consulate’s Office, painted a more realistic picture that left some participants questioning the opportunity cost.

Brazil is still extremely protectionist of its own industry and companies.  This manifests itself in significant tariffs on international goods and services. A Brazilian company paying for a service from an international company might expect to pay 40% on top in taxes. International companies looking to move profits out of Brazil into their home country can expect a similar (40%) tax rate on taking funds out of the country. Businesses also must hire a certain number of Brazilian employees for every foreign one and cannot have business operations in Brazil without a full time managing director located there who assumes full, personal responsibility for the company – one example of a complicated business legal system.

This can all be challenging for small companies with limited resources particularly because English is not widely spoken, even in technology or professional industries; a point felt strongly by our Tech Expedition as we attempted to explain advanced digital services in broken Portuguese, sign language and Powerpoint slides to attendees at the Rio Info conference. The conference was the region’s largest technology event and ostensibly the focal point around which UKTI had organised the trip.

Another intriguing point for the tech companies was Brazil’s lack of data protection laws. While the UK companies would of course be bound by EU data protection laws, their Brazilian competitors faced no such restrictions. Personal, medical, educational and online data can be bought, sold, resold and used for marketing purposes without any penalties – and consumers are uneducated about this so are not asking for change.

Finally, infrastructure in Brazil is still extremely dated, particularly outside the state of Sao Paulo which occupies only 3% of the country’s land mass, despite driving 60% of its economy. Across the country poor roads, transport and civil services mean that it can be expensive and difficult to transport goods, services or personnel.

As we learned about the tricky landscape we would need to navigate to begin business operations in Brazil, professional consultants’ cautions were balanced with the vibrant Brazilian world around us. In Sao Paulo, a never ending city of skyscrapers, even cabbies checked directions on their smartphones. In Rio, despite the sea of tents and corrugated metal boxes that made up the shanty town Favelas, the beaches and tourist attractions were packed with tens of thousands of local and international tourists, stimulating the economy.

The tech and start-up scene was booming, at least if the numerous government-backed start-up accelerators were to be believed. Cesar, a self-proclaimed “Brazilian IDEO” had supported 70 projects, funded nine business plans and helped three companies start generating revenue in the last year while Invest Sao Paulo had the backing of the local and federal governments to bring both Brazilian and international businesses into their accelerator program with up to $100,000 of investment – as long as they based themselves in Sao Paulo.

Brazil is a perfect market for 23snaps. It’s family-oriented, social, and there is a huge consumer appetite for new online services and networks. On top of that, there are almost 300 million people living in Brazil and consumer smart phone and internet access is exploding. But we can’t forget that Brazil is still a developing country and there are a couple of challenges we need to overcome, particularly related to financial operations, data protection and infrastructure in the country

Brazil was, for myself and many of The Great Tech Expedition participants, a conundrum – even more so for having visited. Local enthusiasm for the London companies, obvious consumer demands and a European-like attitude towards consumer products was, for many, enough to counter the numerous challenges and increasingly bleak outlook on Brazil from global economists. The final day in Rio, with the iconic Christ statue smiling benevolently down on the British entrepreneurs, was filled with optimistic discussion of a return trip, final signatures on contracts and the opportunities ahead. Yet by the time our plane landed, both the London drizzle and reality of operating in Brazil had cooled the group’s passions. Despite our, and UKTI’s best efforts and desires, there is still a long way to go before small British businesses are up and running effectively in the tempting, challenging and intriguing Brazilian market.

Meaghan Fitzgerald is the head of marketing at 23snaps, a free app and website that allows parents to save photos, videos and updates of their children to a digital journal, and privately share those updates with f
amily around the world. Launched in 2012, the business is growing by over 30% month-on-month and drives revenues through sales of photo prints and photo books. It has also won a Lovie award for top Lifestyle app, listed as a top iOS app of 2012 by both ZDNet and The Next Web and featured in the iTunes exclusive Apps for Parents collection.

He owns a £150m property empire and two football clubs. Do you know Anthony Armstrong Emery?

UKTI: We have to capitalise on the Olympic momentum to boost exports