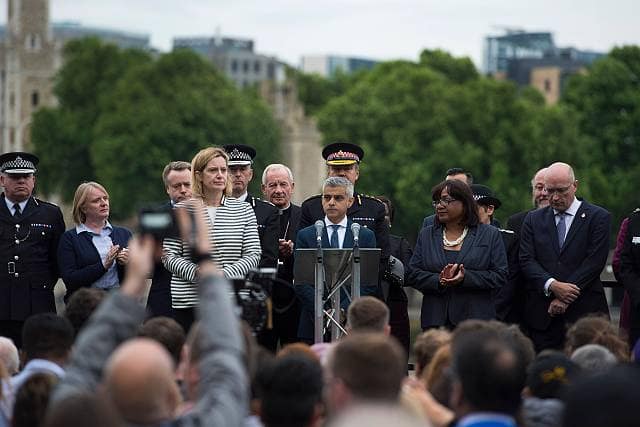 Mayor: Police will have ‘zero tolerance of hate crimes’ as incidents rise in aftermath of London Bridge attack

The mayor of London, Sadiq Khan, has Wednesday, warned that the Metropolitan Police will take a “zero-tolerance approach to hate crimes” as the latest statistics show an enormous spike in incidents of hate crime and Islamaphobic incidents in the aftermath of the London Bridge attack, Saturday.

Provisional statistics for 6 June show a 40 per cent increase in racist incidents, compared to the daily average this year, and a fivefold increase in the number of Islamaphobic incidents. This is the highest daily level of Islamophobic incidents in 2017 to date, and higher than recorded levels following the Paris attacks in November 2015 and the murder of Lee Rigby in May 2013.

The mayor called on all Londoners to report any hate crimes of any kind they witness to the police, and warned: “If you commit a hate crime, you face arrest.”

Khan said: “One of the greatest things about London is our defiant unity in the face of adversity – and that will not change in the aftermath of this horrific attack.

“Just as the police will do everything possible to root out extremism from our city, so we will take a zero-tolerance approach to hate crime.

“If you witness a hate crime please report it to the police. If you commit a hate crime, you face arrest.

“I’m calling on all Londoners to pull together, and send a clear message around the world that our city will never be divided by these hideous individuals who seek to harm us and destroy our way of life.

“London will never be cowed or divided by terrorism.”