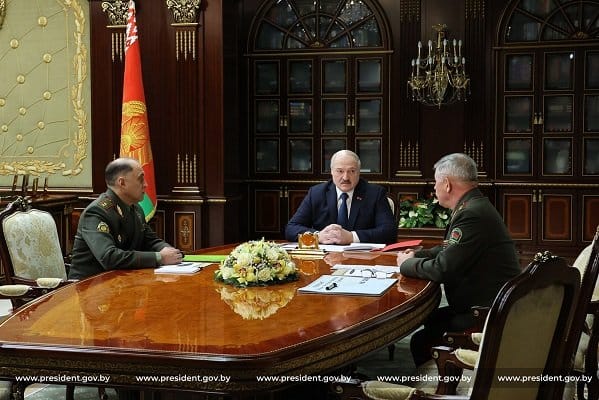 President Alexander Lukashenko has cracked down on citizens wanting to leave Belarus by limiting their right to leave for up to six months if the KGB deems this “contradicts the interests of national security.”

The dictator of Belarus has ordered a draft law giving the KGB the right “to limit citizens” leaving the country as Lukashenko is fearing a military coup amongst his senior officers.

The Kyiv Independent wrote in a tweet, “Belarus preparing additional restrictions on exit of citizens.

“A draft law proposes to give the KGB the ability to limit citizens’ right to leave the country for up to six months if it ‘contradicts the interests of national security,’ Belarusian Reformation reports.”

Senior military officers could stage a major revolt over the Minsk’s alignment with Russia over Vladimir Putin’s “illegal invasion of a sovereign state.”

Lukashenkois facing a military coup as his Special Forces officers have accused the leader of “the most serious infringement.”

Lukashenko has pledged his support to Vladimir Putin and has said that he “will continue to support Russia” in its “fight against Nazism.”

Lukashenko’s most senior military officers have accused the Belarusian leader in a stinging attack of “destroying our sovereignty” after the Ukraine and Belarus always had friendly relations.

ticking two fingers up to the Russian President the military officers said that Putin’s war in Ukraine is “totally unprovoked.”

The senior officers wrote, “At the present moment officers from the fifth brigade of the Special Forces have observed the most serious infringement of Clause One of the Belarus Constitution by Russia’s highest political leadership.

“According to this Clause, the Belarus Republic maintains supremacy and full authority on its own territory.

“It also enjoys independence over its internal and foreign politics.”

They added, “Russia’s occupation of the internationally recognised territory of Ukraine, which is friend of our state, and its attempt to pull Belarus into a completely unprovoked war against a sovereign state can only be seen as the destruction of the sovereignty of Belarus.

“By entering the war against Ukraine, Belarus will be evicted from the community of civilised states and will be an international outcast for many years to come.

“To join Russia in its fight against Ukraine would be an act of pure suicide.”