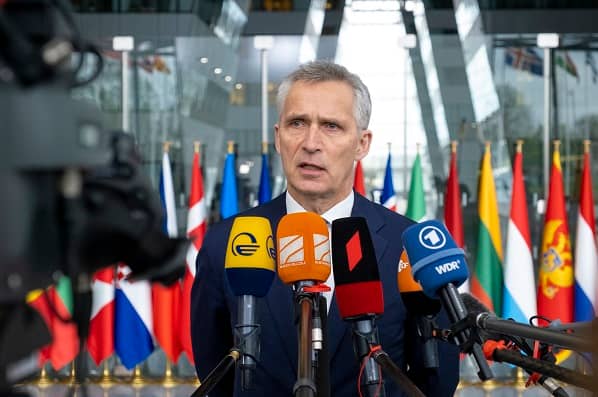 NATO has said that they will send more “heavy warfare equipment” to Ukraine which is a direct threat to Moscow.

Vladimir Putin was delivered a stark warning as the secretary general Jens Stoltenberg comes after Russia used a missile designed to attack aircraft carriers on an apartment block in Dnipro killing at least 40 civilians.

On Saturday the Russian missile strike hit an apartment block and rescuers have been working around the clock to find people trapped under the rubble.

The building was hit by a Russian kh-22 missile and Ukraine does not have any air defences to shoot down this type of missile.

Ukrainian authorities have so far been able to rescue 39, with 75 wounded including 14 children, 40 have been confirmed as having been killed and there are 30 more unaccounted for.

The Kremlin denies targeting any civilian buildings during the widespread attack on Ukraine on Saturday.

NATO’s general secretary, Stoltenberg told reporters in Germany, “The recent pledges for heavy warfare equipment are important – and I expect more in the near future.

“We are in a decisive phase of the war. We are experiencing fierce fighting.

“Therefore, it is important that we provide Ukraine with the weapons it needs to win – and to continue as an independent nation.”

The British Prime Minister Rishi Sunak has confirmed on Saturday during a phone call with Ukraine’s President Volodymyr Zelensky that they will send “Challenger 2 tanks and additional artillery systems.”

A Downing Street spokesperson said, “The leaders reflected on the current state of Russia’s war in Ukraine, with successive Ukrainian victories pushing Russian troops back and compounding their military and morale issues.

“They agreed on the need to seize on this moment with an acceleration of global military and diplomatic support to Ukraine.

“The prime minister outlined the UK’s ambition to intensify our support to Ukraine, including through the provision of Challenger 2 tanks and additional artillery systems.

“The prime minister and President Zelenskyy welcomed other international commitments in this vein, including Poland’s offer to provide a company of Leopard tanks.

“The prime minister stressed that he and the whole UK government would be working intensively with international partners to deliver rapidly the kind of support which will allow Ukraine to press their advantage, win this war and secure a lasting peace.”