Home Business News Jeremy Hunt could be the ‘strongest Chancellor in history, because Truss is so weak’ and he suggested there could be tax rises 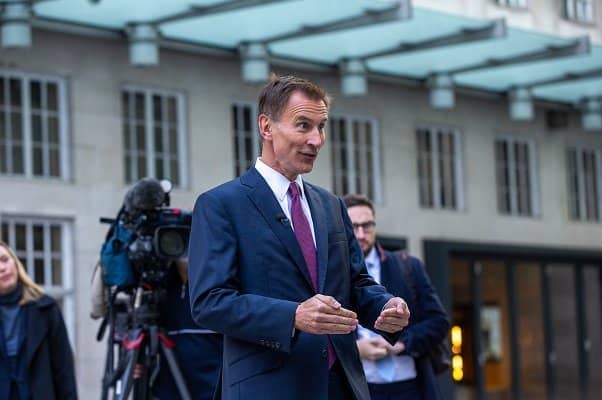 Jeremy Hunt could be the ‘strongest Chancellor in history, because Truss is so weak’ and he suggested there could be tax rises

Jeremy Hunt could “be the strongest Chancellor in history” and he is seen as the most powerful figure on Liz Truss’s government.

Hunt has also warned that there will be “difficult decisions” and has hinted there could be tax rises in the next Budget.

ITV’s political editor Robert Peston suggested that Hunt could be the “strongest Chancellor in history, because Truss is so weak.”

In a series of interviews on Saturday Hunt will “totally reset” the Prime Minister’s economic plan which could save Truss’ premiership.

Peston wrote, “I put to him that he is the strongest Chancellor in history, because Truss is so weak after the chaos of the past few weeks and the way bond prices sunk after her press conference yesterday, she hasn’t the power to countermand any measure he deems necessary.

“If she even thought of sacking him, she would be toast. He didn’t engage with that, insisting instead they are a team, and that it is in the national interest she survives as PM.

“If that is right, however, the new Chancellor may be in the unusual position of being the team captain.

Hunt warned on Saturday there will be “difficult decisions” to come and has suggested there could be tax rises and spending cuts.

The Chancellor told Sky News, “It was a mistake when we’re going to be asking for difficult decisions across the board on tax and spending to cut the rate of tax paid by the very wealthiest.

“It was a mistake to fly blind and to do these forecasts without giving people the confidence of the Office of Budget Responsibility saying that the sums add up.

“The Prime Minister’s recognised that, that’s why I’m here.”