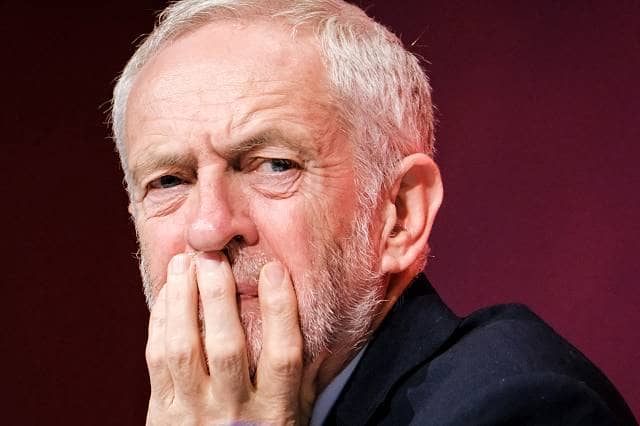 Jeremy Corbyn has had more than £100,000 raised by campaigners for a “legal fund” as John Ware, the BBC Panorama journalist could be set to sue the former Labour leader

Corbyn had criticised the Labour Party’s decision to pay “substantial damages” in the High Court this week to former employees who took part in the Panorama expose on anti-Semitism.

The Labour Party settled a defamation case this week in the High Court brought by seven whistleblowers who featured in BBC Panorama’s programme titled “Is Labour Antisemitic?” as well as Ware, who was behind the programme.

It has been reported that Ware is set to take legal action after Corbyn’s claim that the Labour payout “risks giving credibility to misleading and inaccurate allegations.”

The crowdfunding campaign page reads, “The relentless attacks on Mr Corbyn, a man of integrity, honesty and humility cannot be allowed to continue, and we have an opportunity here to offer him support in a practical way.

“It will also let him know that his supporters have not forgotten him, nor have they gone away.”

Corbyn tweeted, “Thank you friends and comrades for your solidarity. Our campaigning for a better world continues.”

After receiving criticism from some Labour members over the decision to agree to pay damages, Sir Keir Starmer said, “I want to draw a line under anti-Semitism in the Labour Party.

“I made it clear that we would draw a line under anti-Semitism. Settling this case was important in that respect.

“It was the right decision, the right thing to do.”

In response to the High Court settlement, Corbyn issued a statement on Facebook, “Labour Party members have a right to accountability and transparency of decisions taken in their name, and an effective commitment from the party to combat antisemitism and racism in all their forms.

“The Party’s decision to apologise today and make substantial payments to former staff who sued the party in relation to last year’s Panorama programme is a political decision, not a legal one.

“Our legal advice was that the party had a strong defence, and the evidence in the leaked Labour report that is now the subject of an NEC inquiry led by Martin Forde QC strengthened concerns about the role played by some of those who took part in the programme.

“The decision to settle these claims in this way is disappointing, and risks giving credibility to misleading and inaccurate allegations about action taken to tackle antisemitism in the Labour Party in recent years.

“To give our members the answers and justice they deserve, the inquiry led by Martin Forde must now fully address the evidence the internal report uncovered of racism, sexism, factionalism and obstruction of Labour’s 2017 General Election campaign.”

His statement caused outrage amongst the Jewish community, as he “bullied” the whistleblowers for “standing up to Jew-hatred,” said the Campaign Against Antisemitism (CAA)

Gideon Falter, Chief Executive of the CAA said, “From the backbenches, Jeremy Corbyn continues to spread conspiracy theories to cover up how the Labour Party became institutionally racist under his leadership.

“A few weeks ago he gaslit the Jewish community by claiming that the EHRC, in whose investigation we are the complainant, is ‘part of the government machine’.

“Now he is gaslighting the whistleblowers he bullied for standing up to Jew-hatred. We have been calling for Mr Corbyn to be disciplined since 2016.

“We are again calling on Sir Keir Starmer to suspend Mr Corbyn now and open a disciplinary investigation.”

The Labour party will also pay damages to journalist John Ware who presented the BBC’s Panorama investigation, as he was falsely accused of “deliberate and malicious misrepresentations designed to mislead the public.”