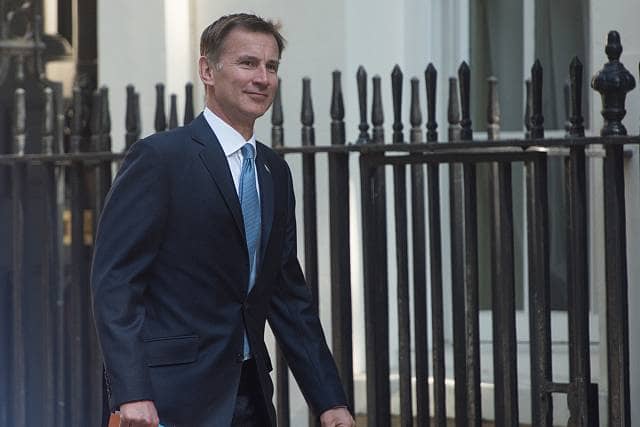 Jeremy Hunt responds to Boris Johnson in a letter as Johnson will not appear in a head-to-head TV debate on Sky, accusing his rival of not being straight with the public over Brexit and getting his facts wrong.

Thank you for your letter of 25th June.

I had hoped we would be able to debate these issues in person at Sky on Tuesday evening or next Monday, or at one of the proposed debates next week, but as you don’t wish to face me in person before members have started voting, for now we must use your preferred method of debate, exchanging letters.

In response to your questions, I believe with a trusted negotiator and the right team we should get a deal by 31 October. If however, there was no prospect of delivering Brexit with a better deal I would leave without one.

I also believe the biggest risk to Brexit is a general election, and a Jeremy Corbyn government, before it is delivered.

I have a few questions too.

You maintain it will be possible to trade without tariffs in a no deal scenario due to Article 24 (the so-called Gatt-24) arrangements.  Our Leave-voting colleagues – the Secretary of State for International Trade and the Attorney General – who between them boast considerable expertise on this topic, state that this is not the case because it would require a deal with the EU to reach this arrangement.  Geoffrey Cox’s legal advice is universally acknowledged to be full, frank and impartial.  If it were not so, you and many of your ERG colleagues would not have pointed to his opinion that the backstop risks trapping us within the EU’s orbit as a reason to vote down the withdrawal agreement.  Who is correct: you or the Attorney General and the International Trade Secretary?

You also maintain that in a no-deal scenario we can negotiate a free trade agreement during an implementation period.  It is a fact that there can be no implementation period without a withdrawal agreement because it would require a deal with the EU to reach this arrangement.  However much we wish something not to be the case, however strong the pragmatic or economic case for a different approach, the experience of the last three years has shown that the EU are prepared to put the cohesion of their political project above economics. We must be careful to face the facts as we find them.  Will you be straight with people that no deal means no implementation period?

You stated yesterday that the odds of no-deal are ‘a million to one’.  Those odds are wildly different to those given by those in the business of actually judging the odds (some bookmakers put the chance of No Deal at 2:1), so I fear that this statement flies in the face of reality.  I am completely convinced that with the right approach there is a deal to be done. But we must level with people and acknowledge that this will be tough and complex. Our great country can ultimately flourish with or without a deal, but we need credible, detailed plans to make that happen.

Over the past few days you have got some important facts wrong. I believe it is now more vital than ever that we conduct head to head debates this week before ballot papers go out, so party members can make up their minds if you – and indeed I – understand the detail on these crucial issues.

Ps. No need to reply – let’s discuss further at Sky on Monday evening?

Tax adviser warn the raid on R&D tax relief for...