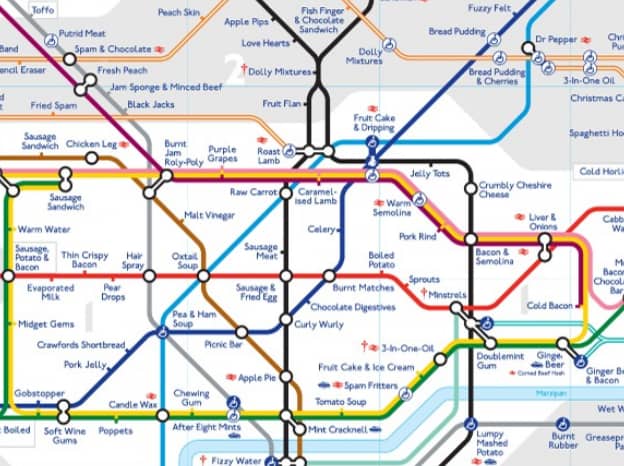 We’ve seen a Super Mario Tube map, a Lego Tube map and even, a rude word Tube map. But a new Tube map that shows what each station tastes like takes the biscuit.

James Wannerton, a 54-year-old systems analyst from Blackpool, has a neurological condition called synaesthesia which enables him to taste words he reads or hears.

“Baker Street is lovely. The best way to describe it is crusty and sweet, like jam roly-poly but slightly burnt. It has got loads of different tastes and textures. I love getting off there.”

“Bond Street tastes like hair spray, metallic and slightly bitter. You know when someone is spraying their hair and you breath in and taste some of it? It is like that.”

Wannerton compared King’ Cross Tube station’s taste to that of a “moist Dundee cake without the almond bits. Or a rich fruit cake with lumps of fruit in.”

Explaining how he detects tastes, Wannerton said, “It is incredibly consistent. These tastes and textures never change.

“All I did was traverse the underground lines. It was very natural and involuntary; when the taste popped up I made a note of it.”