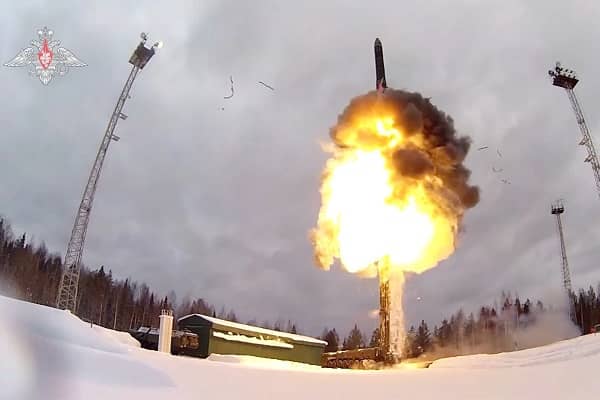 An expert has warned there is a “one in six” chance of a nuclear war between the US and Russia as Vladimir Putin is warning he could use tactical nuclear weapons in Ukraine.

The Kremlin’s spokesman Dimitry Peskov warned on Tuesday that the newly formed annexed regions of Ukraine are now “protected” by the Russian Federation and which does include the use of nuclear weapons.

Peskov said, “Their security is provided for at the same level as the rest of Russia’s territory.”

Professor Max Tegmark at the Massachusetts Institute of Technology, wrote in the blog LessWrong, “Many people have asked me what I think the odds are of an imminent major US-Russia nuclear war.

“My current estimate is about the same as losing in Russian roulette: one in six.”

The Professor also tweeted, “Here’s why I think there’s now a one-in-six chance of an imminent global #NuclearWar, and why I appreciate Elon Musk and others urging de-escalation, which is in the national security interest of all nations.”

The Professor compared the situation to the US losing Vietnam if the Ukraine wins the war and he believes that should Russia win then the chances of “Kosovo breaking away from Serbia” type of scenario could happen in the four annexed regions.

However both Ukraine and Russia would find it extremly difficult to accept either possibilities and Moscow could then use nuclear weapons in the most extreme outcome.

Professor Tegmark wrote, “I view it as highly unlikely (<10%) that Putin would accept ‘Vietnam’ without first going nuclear, because it would almost certainly result in him being overthrown and jailed or killed.

“On the other hand, I also view it as highly unlikely (<10%) that the West would accept a ‘Kosovo’ scenario where Russia is granted a peace deal where it keeps everything it’s annexed.

“That is because if the powers that be in the West were that appeasement-minded, they would presumable have opted for a ‘Cuba’ scenario in 2021 by acquiescing to Russia’s demand that Ukraine never join NATO.

“This means that with high (>80%) probability, the current vicious cycle of escalation will end only with de-escalation into one of the intermediate outcomes (“Libya”/”Korea”/”Finland”) or with lower-case “kaboom” (Russian nuclear use in Ukraine).”

EU foreign policy chief gave Putin a stern warning at the Diplomatic Academy in Brussels, “Putin is saying he is not bluffing.

“Well, he cannot afford bluffing, and it has to be clear that the people supporting Ukraine and the European Union and the Member States, and the United States and NATO are not bluffing neither.

“Any nuclear attack against Ukraine will create an answer, not a nuclear answer but such a powerful answer from the military side that the Russian Army will be annihilated.”

The Head of the Office of the President of Ukraine Mykhailo Podoliak said in an interview with the German publication Bild, that the Russian authorities understand this.

He said that NATO has “categorically” warned Russia in the most strongest terms that if Putin even “attempts to nuclear weapons, there will be a response.”

Podoliak said, “NATO is monitoring everything that is going on in Russia with nuclear weapons.