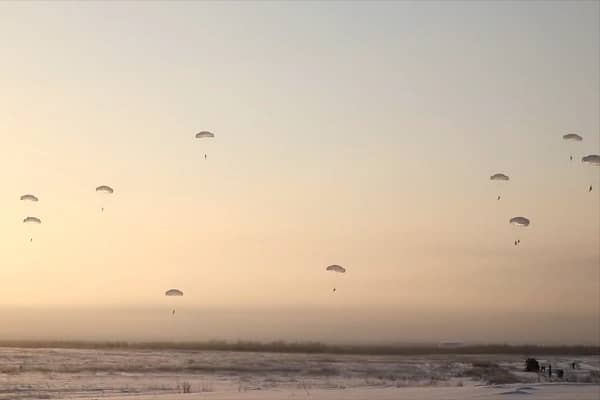 The Russian Army is in tatters and has descended into further chaos after “elite Russian paratroopers” made “desperate calls” for fire support were ignored by “drunken” artillery officers.

Russian paratroopers are being forced into the “heaviest fighting” in the Kherson region as Ukraine’s counteroffensive gathers momentum in the area as they are trying to recapture the city.

In an attempt to foil President Zelensky’s men from recapturing Kherson Vladimir Putin has deployed some of his most experienced commanders to the region, which includes the elite paratroopers who do poses high combat skills.

WarMonitor who regularly comments on the situation on the ground in Ukraine, tweeted, “Russian artillery teams near the Inhulets front line reportedly did not respond to desperate calls from Russian Paratroopers and failed to provide any fire support for hours.

“Russian sources complain about them being ‘Drunken’ which would not surprise me at all.”

WarMonitor added “Russian ‘elite’ paratrooper units are being forced into the heaviest fighting in Kherson region.

“It seems the Russian elite units will be non existent after this war….

“This is largely due to the normal infantry being so incompetent that elite units are put in frontal assaults.”

The Kremlin has given Russian troops a “deadline” to end the war in Ukraine to “secure the of Donetsk Oblast” region by 15 September, however the British Ministry of Defence (MoD) has said it is “highly unlikely” Putin will “secure” the Donbas region.

The MoD report said, “The political goal of the Donbas operation almost certainly remains to secure the whole of Donetsk Oblast, which would enable the Kremlin to announce the ‘liberation’ of the Donbas.

“The Ukrainian authorities have claimed that Russian forces are now under orders to complete this mission by 15 September 2022.

“The force is highly unlikely to achieve this, which will further complicate Russia’s plans to run referendums on the occupied areas joining the Russian Federation.”

Zelensky said, “Progress is being made to liberate all our lands and all our people.

“The Armed Forces of Ukraine, our intelligence, and special services are already taking the necessary steps for this.

“These steps can be heard.

“And everyone can see that the occupiers have already started fleeing Crimea.

“This is the right choice for all of them.”