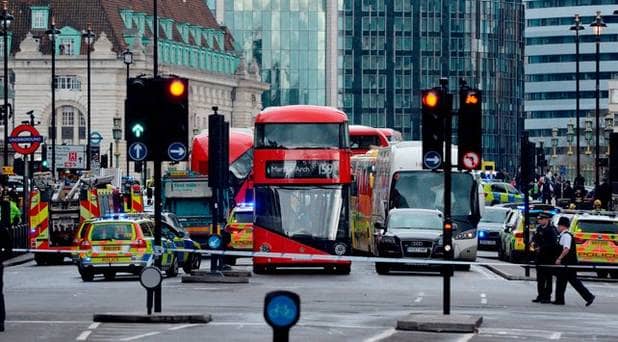 There confirmed reports of a serious incident in Westminster. Scotland Yard are treating this as a terrorist incident.

David Lidington, the Commons leader said today a “police officer has been stabbed” and the “alleged assailant was shot by armed police” amid “further violent incidents” in the area.

Witnesses have been describing the scene and seeing a middle aged Asian man carrying a knife.

Daily Mail journalist Quentin Letts whose office overlooks the scene told the BBC of the moment police shot the man.

“This man had something in his hand, it looked like a stick of some sort and he was challenged by a couple of policemen in yellow jackets and one of the yellow-jacketed policemen fell down.

“We could see the man in black moving his arm in a way that suggested he was either stabbing or striking the yellow-jacketed policeman, and one of the policemen then ran to get help, which was very quick to come and as this attacker was running towards the entrance used by MPs to get into the House of Commons.

“As he was running he ran, about I’d say 15 yard perhaps, two plain clothes guys with guns shouted at him what sounded like a warning, he ignored it and they shot two or three times and he fell.”

Witness Richard Tyse told Sky News: “I came out of Westminster tube station which was being locked down behind me (by police). I was ushered onto Westminster Bridge and looked onto the west pavement of the bridge and literally north to south I must have counted 8-10 prostrate figures on the ground.

“I understand a car had driven along the pavement knocking people over and that’s why many people were lying on the ground.”

He added: “The whole length of the bridge there were people on the ground who had clearly been injured.”

Jayne Wilkinson told Sky News: “We were taking photos of Big Ben and we saw all the people running towards us, and then there was an Asian guy in about his 40s carrying a knife about seven or eight inches long.

“And then there were three shots fired, and then we crossed the road and looked over. The man was on the floor with blood.

“He had a lightweight jacket on, dark trousers and a shirt.

“He was running through those gates, towards Parliament, and the police were chasing him.”

A woman in Parliament Square at the time of the shooting said: “We literally just heard shots and then saw people running, and we went to have a look.

“I saw a body, they were working on the floor. They were just inside the gates.

“He had one gunshot wound to the right side of his chest. I don’t know if he was dead or alive, but people were working on him.”

Mr Lidington said: “An air ambulance is currently attending the scene to remove the casualties.

“There are also reports of further violent incidents in the vicinity of the Palace of Westminster but I hope colleagues on all sides will appreciate that it’d be wrong of me to go into further details until we have confirmation from the police and from the House security authorities about what is going on.”

St Thomas’s hospital is also on lock down for staff and visitors.

President Donald Trump’s press secretary, Sean Spicer has said the US President Trump “has been briefed on the situation.”

Pauline Cranmer, of London Ambulance Service, said to the BBC: “We have sent a number of resources to the scene including ambulance crews, London’s Air Ambulance and our Hazardous Area Response Team.

“As we continue to respond to the incident in #Westminster please only call for an ambulance in a genuine emergency.”