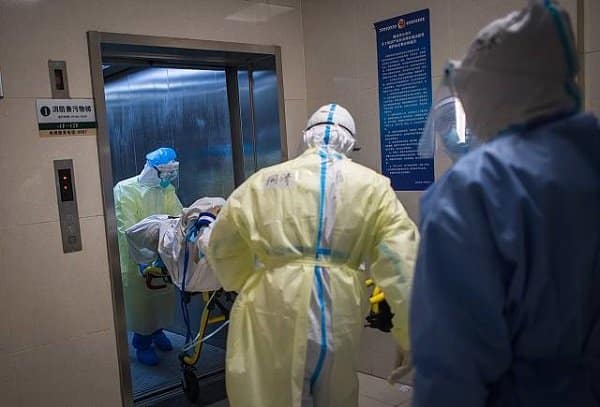 India’s health system is overwhelmed with soaring cases and deaths and an increasing amount of Covid patients are being diagnosed with a rare and potentially deadly black fungal infection which rots the organs.

Covid patients in India are being diagnosed with Mucormycosis which is also known as a “black fungus” which has been found in people who have recovered.

The black fungus rots the patients organs and there has been five times as many of the cases.

There was almost 3,000 deaths on Monday and almost 370,000 cases were reported, but experts believe the real number is far higher.

Patients who have a weaend immune system or diabetes are more likely to suffer with the aggressive black fungi.

Mucormycosis can lead to blackening of the nose, blurred or double vision, chest pain, breathing difficulties and or coughing blood.

Health officials have warned that the current mortality rate is “very high.” Khusrav Bajan, a member of the Mumbai’s Covid-19 taskforce.

Khusrav Bajan, a member of the Mumbai’s Covid-19 taskforce said that up to 300 cases have been confirmed.

Atul Patel, a member of the state’s Covid-19 taskforce warned, “The cases of mucormycosis infection in Covid-19 patients post-recovery is nearly four to five times than those reported before the pandemic.”

David Denning, a professor at the UK’s Manchester University and an expert at the Global Action Fund for Fungal Infections (GAFFI) charity, said there has been black fungi cases in several other countries, including the UK, U.S., France, Austria, Brazil and Mexico.

He added, “but the volume is much bigger in India,” whilst other doctors fear there could potentially be contamination in hospitals within the oxygen pipes and humidifiers.

However, India has said there is no major outbreak and no national data has been published.

Bajan warned, “The mortality rate is very high… Even the few that recover, only recover with extensive and aggressive surgery.

“This is a fast-moving infection. It can grow within two weeks… It’s a Catch-22, coming out of a virus and getting into a fungal infection. It’s really bad.”

PHE are trying to attempt to control the spread of the new strain and three sub types of the “double variant” has doubled to 520 cases this last week compared to 202 the week before.

PHE have labelled the strain B.1617.2 as a “variant of concern” as indications show that this variant is more “transmissible.”

England’s chief medical officer, Chris Whitty has said England must “keep an eye” on the virus that has ravaged India as it is taking hold in parts of the country.

The chief medical officer admitted that he does not know if the Indian double mutant variant could create “significant problems” in the autumn.