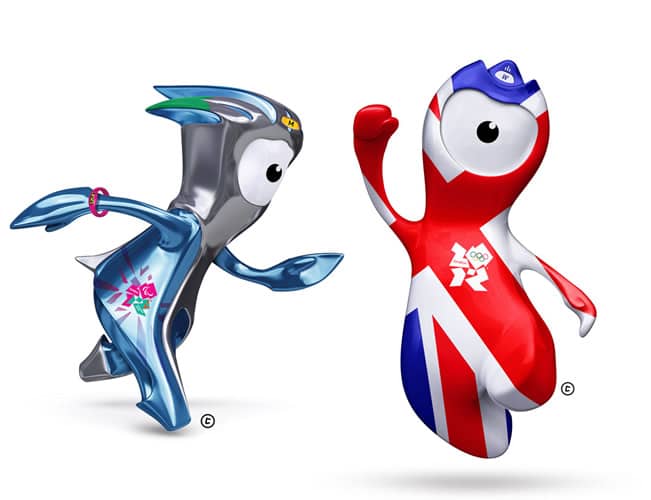 ArtMan: Look world, look how dull we can be

WTF – there, I said it and it feels good.

As a former decent standard 400m hurdler (stop laughing – it was years ago) I do have a soft spot for the Olympics, but I am deeply saddened by the standard of gloss and fluff applied to the London games.

Ok I am partisan, but I always see England as one of the world leaders in cutting edge design and creativity. But, where is this showcased in the Games? Show me cutting edge creativity .. I can’t find it anywhere.

Let’s start with the logo. It’s a sad blocky dated potato print of a design. It really can easily be done with a potato, I witnessed my mate’s kids happily 2012’ing wrapping paper with King Edwards. Did we order a logo that can be done with a potato? Maybe I’m missing something, maybe the brief said simple, garish and unforgettable for the right reasons.

Moving on to the Stella Mc Cartney designed Team GB kit. To be fair, Stella is a great designer and off late has produced her best work. I am presuming she was severely restricted by someone somewhere. The end result is a smart sharp kit, but is dull in its shade of blue, fairly dull in its design and dull in its cut. Will we be able to pick team GB out of a tight knit 1500m race?  Not if there is another bland outfit in the line up!

About as loveable as a microwave: Wenlock and Mandeville

What of our mascots Wenlock and Mandeville. A mascot should be cute, endearing and represent a nation. How about a badger, a fox cub or even an at risk species who’s plight could be showcased. But no, someone said lets go with …two mobile phones. Why does an inanimate soulless annoying appliance, often the bane of people’s life, have to do specifically with the GB? Is mobile phone manufacturing key to the UK economy? No! Reasoning, logic and design went right out of the window. Someone decided a  phone would be written in the history books. The ‘story’ that they are forged out of drops of steel left over from the stadium build doesn’t add to their lovability. There may not be many mentions of them being actual mobile phones, but they are.

And what of our stadium design, does it represent anything ground-breaking, innovative or special? Does it scream here’s a country at the cutting edge of design, or does it whimper, ‘I’m functional’? Beijing’s birds nest stadium shines over as innovative, cutting-edge and memorable. In my opinion, it’s hard to pick our Olympic stadium design out from any other design.

Moving limply and depressingly on to the showcase artwork,  Anish Kapoor’s Orbit, the tallest sculpture in the UK.  As director of a public art agency, I regularly commission artists to pretty up, provoke or service the landscape. I would not have commissioned Orbit. Those who have clambered inside the ‘experience’ have spoken positively about its vastness and twists and turns and a few even stuck their neck out and said £15 was a good price to pay to wander up it.

Compare Orbit to the work of Gerry Judah at Goodwood he consistently produces amazing polished wonderful landmark works. This level of quality would have been in keeping with the message we want to portray. Orbit says ‘we’re still in recession’.

Coney Island in NYC is iconic as a dilapidated funfair full of edge and menace. Orbit would almost fit in as a ‘long past its best’ icon of fun. Except it’s not old and dilapidated and it costs £22.7m. What a terribly sad-bad-tragic waste of money. If it were in the sightline of my property I would sue. Yes, I do get that the oddness and quirkiness is it’s ‘thing’ but –either make it MUCH odder and quirkier or much sleeker and beautiful not this mid way nothingness lump of metal.

Kapoor is a genius, his Cloud Gate in Chicago is almost perfect as a work of public art and his body of work is truly amazing. It relates to the public on an intimate and at a great distance. Orbit, for me, works only just, when you are inside. Orbit tears the horizon apart like a bad rip in Christmas turkey foil, never to be repaired and highly capable of ruining the roast inside. Who had the final say in this heap of junk, whose head should, but won’t roll?

The magnificent Cloud Gate in Chicago, Kapoor at his best. © Reinier de jong

Design standards are hard to enforce and of course it’s hardly ever possible to get a consensus of opinion.  I think collectively creatively we could have, should have, done a much, much, better job, creative boundaries should have been smashed, instead they haven’t been reached.

We now need the most exciting opening ceremony in the history of the Olympics to balance out the creative mediocrity. I have great faith in the skewed brain of Danny Boyle to deliver. But, if it’s as anti-climatic as the launch of the Shard then I’m moving to China.

Kevin Wilson is an international arts consultant, curator and collector. He advises on collections, investments and projects. His clients range from the Historical Royal Palaces, international corporations, private individuals and collections worldwide. He is also director of the public art agency Artpoint and one half of fashion designer duo Vin and Omi  www.kwart.co.uk www.artpointtrust.org.uk www.vinandomi.com