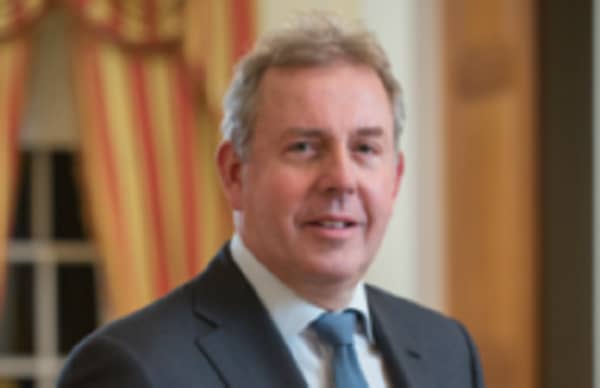 Who is Sir Kim Darroch?

Sir Kim Darroch KCMG was born in the village of South Stanley in County Durham in 1954 where he was educated at Abingdon School and then went on to Durham university.

In 1975 Sir Kim graduated with a bachelor’s degree in Zoology and then joined the Foreign and Commonwealth Office (FCO) in 1976.

In 1980 he was appointed to the Diplomatic Serivce and served as the first secretary in Tokyo from 1980 until 1984.

He served in a number of jobs after his Tokyo posing such as desk officer for the Channel Tunnel project and was the co-secretary of the UK-French Channel Treaty Group.

In 1998 he was promoted to director to head up the FCO press office and in 2000 he went back to in policy as director or EU Comd.

During 2003 he was promoted again as the director general of Europe and then transferred to Number 10 Downing Street to head up the Cabinet Office and served as the principal advisor to the prime minister on European affairs.

Sir Kim was appointed as the British permanent representative to the EU for a four year term in 2007.

In 2011 he replaced Sir Peter Ricketts as the national security advisor, and in August 2015 the FCO announced that Sir Kim would take up his role as the UK ambassador to the US.

On 7 July 2019 a series of secret diptels (diplomatic telegrams) that Sir Kim wrote were leaked to the Mail on Sunday dating back to 2017.

It was in these diptels unflattering remarks were made against President Donald Trump saying that he is “inept and insecure” to which Nigel Farage said Darroch is “totally unsuitable” for office.

A row then erupted over Twitter where Trump said that Darroch was “not liked or well thought of within the US” and the US “will no longer deal with him.”

As result of the leak and one other political factor he resigned on Wednesday.

UK ‘will not hesitate’ to impose quarantine on other countries

UK has no quarantine measures despite Spain’s 180 outbreaks

Prime Minister slammed for merging DFID into the Foreign Office

Brits told you are ‘not allowed to go on holiday’

FCO advises against all travel ‘indefinitely’ over pandemic

FCO warns Brits to return back to the UK now