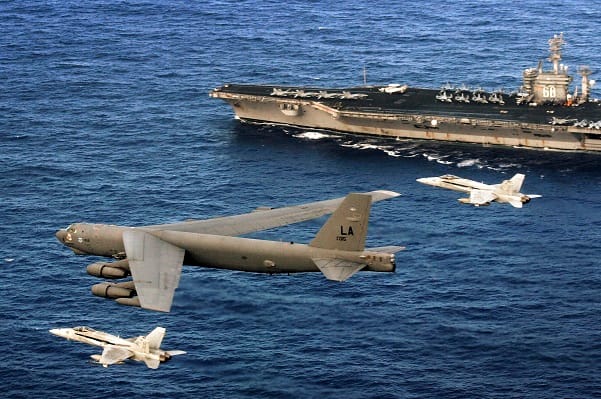 Two nuclear capable B-52 bombers have taken off from a base in the UK for a night mission across Europe.

Europe is inching closer to World War Three hour by hour as world leaders are holding a series of talks with their counterparts.

The British Armed Forces Minister James Heappey fears “we are closer than we’ve been on this continent” since the start of the Cold War in 1947.

The B-52 bombers took off from an RAF base in the UK on Sunday evening and flew down the western coast of France then flew to the Mediterranean heading towards the Middle East.

The two nuclear capable bombers were visibly seen on publicly available flight radar data and were operating under the call signs of Chief11 and Chief12.

Last week the Russian President Vladimir Putin gave a chilling warning that if he does not get his own way there could be a nuclear war in Europe.

Putin said that talks with his French counterpart Emmanuel Macron were constructive and told a press conference that there will be a nuclear war if Ukraine joins NATO.

The Russian President said, “I want to stress it one more time. I’ve been saying it, but I’d very much want you to finally hear me, and to deliver it to your audience in print, TV and online.

“Do you understand it or not, that if Ukraine joins NATO and attempts to bring Crimea back by military means, the European countries will be automatically pulled into a war conflict with Russia?”

“There’s thousands more on amphibious shipping in the Black Sea. Russia has concentrated artillery missile systems and combat air in the area.

“And, perhaps more ominously, although it grabs less headlines, all of the combat enablers, the logistics, the fuel, the medical supplies, the bridging assets, are all also now in place.

The B-52 bombers still carry nuclear weapons and nuclear cruise missiles and according to US military sources movement of the aircraft will be for pilots to train in the “European theatre and airspace” which will form part of the wider Bomber Task Force group in Eastern Europe.

The B-52H is the US Air Force’s (USAF) long-range, large-payload multi-role bomber and also known as the Stratofortress or the Buff (big ugly fat fellow).

The B52 is a long range strategic bomber and can carry out precise nuclear guided conventional weapons globally with precise navigation capability.

U.S. Air Force Gen. Jeffrey Harrigian, the commander of U.S. Air Forces in Europe and Air Forces Africa said he was “very comfortable that we…[can] operate with their joint terminal air controllers, their entities on the ground, from the Baltics down into the Med and even into Romania.”

He pointing out the “continued interaction with them that has allowed us to keep our close air support capabilities at the right level and continue to improve our readiness.”