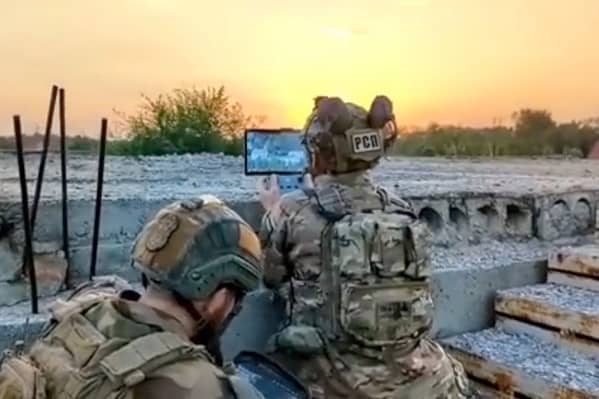 On Friday Kyiv announced that the city of Kherson has now been liberated along with dozens of surrounding towns and villages.

Ukrainian forces were met with celebrations from civilians in the strategic port city and confirmed that the Russians have all fled.

The Russians have mined “everything” they could, blew up bridges before they fled which has been seen as brutally humiliating for Vladimir Putin and the Kremlin, even more so as panicked Russian soldiers even abandoned their wounded retreated.

Mykhailo Podolyak who is the top aide to the Ukrainian President Volodymyr Zelensky, said Russian forces had mined “everything they can” in Kherson and that Russian troops blew up bridges to slow Ukraine’s advance.

Podolyak said, “RF [Russia] wants to turn Kherson into a ‘city of death.’ The Russian military mines everything they can: apartments, and sewers.

“Artillery on the left bank plans to turn the city into ruins.

“This is what [the] ‘Russian world’ looks like: came, robbed, celebrated, killed ‘witnesses,’ left ruins and left.”

The Kremlin confirmed the brutal humiliating withdrawal of around 30,000 to 40,000 troops on Friday morning.

The Russian Defence Ministry said in a rare statement, “At 05:00 Moscow time today, the redeployment of Russian units to the left (eastern) bank of the Dnipro River was completed. During the redeployment, not a single piece of military hardware or weaponry was left behind.

“All Russian service personnel were moved across, there were no losses of men, hardware or materiel of the Russian forces group.“

However there were many Russian’s who were “unable to leave Kherson” and changed into civilian clothing, claimed Serhiy Khlan, a council deputy.

Watching videos from liberated villages and towns around #Kherson and cannot stop crying.

Those who still ask "Why not freeze the war and let them have some territories?", should watch this video. This is what we are fighting for, for these people.

We cannot leave them behind! pic.twitter.com/utv9J8R714

Residents were told to stay indoors this morning whilst Ukrainian forces assessed the situation and were hunting for Russian troops.

The Kremlin has said on Friday that despite the Russian forces’ withdrawal from Kherson, this will not change the status of the region.

Kremlin spokesman Dmitry Peskov told reporters Kherson’s status is “fixed” and that no changes were possible and in September Vladimir Putin said that the newly annexed regions will remain Russian lands “forever.”

Peskov added, “It is a subject of the Russian Federation – it is legally fixed and defined. There are no changes and there can be no changes.”

Peskov told the BBC, “There are lots of different experts – some say what you’ve said, some say other things. We don’t want to comment on any of them.

In September Moscow held sham referendums in four Ukrainian regions which were immediately denounced by Kyiv and Western governments as illegal and coercive.