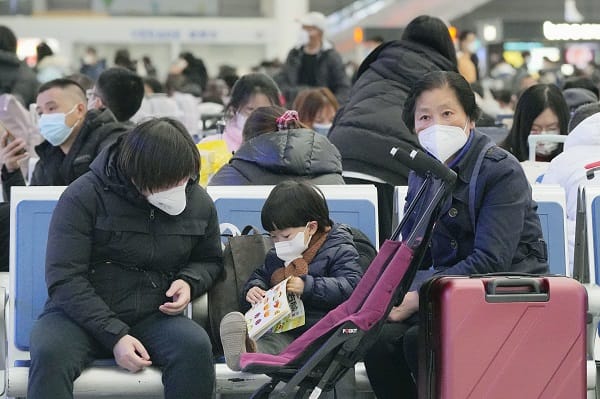 The Transport Secretary Mark Harper has said that even though those travelling from China will have to have a negative test, those who are positive will not have to quarantine upon entry into the UK, despite Beijing admitting there has been many deaths.

China has abandoned their “zero-Covid” policy which will see tens of millions travel globally despite the significant rise in deaths.

China’s largest city Shanghai has as many as 17.5 million people who could be infected and is “70% of the population.”

Dr Erzhen Chen, who is the vice president of Shanghai’s Ruijin Hospital and a member of the city’s COVID-19 emergency advisory panel, warned that as many as 17.5 million people in the city could have been infected with Covid.

Dr Chen told the state-owned media Dajiangdong Studio, “Now the spread of the epidemic in Shanghai is very wide, and it may have reached 70% of the population.”

Dr Chen further warned that the Ruijin hospital is seeing a staggering 1,600 emergency cases every day and four in five are Covid patients.

He added, that “More than 100 ambulances arrive at the hospital every day.”

Transport Secretary Mark Harper told LBC on Monday, that those who do test positive for Covid, will not be required to enter quarantine unlike what happened at the start of the pandemic to protect the public.

Harper said, “What we are doing is we are collecting that information for surveillance purposes.

“But look, one in 45 people in the United Kingdom have got Covid at the moment.

“The policy for arrivals from China is primarily about collecting information that the Chinese government [is] not sharing with the international community.”

AFP reported that there were so many Covid cases at the Ruijin hospital in Shanghai that people had to be treated outside as the emergency ward was overcrowded, with oxygen masks and being hooked up to intravenous drips.

Independent MP Neil Coyle of the Foreign Affairs Committee warned that Chinese officials are scaling down the true extent of the Covid problem that China has.

He said, “The dangers are being tackled by many other countries, but Ministers are still shovelling turkey and ignoring the threat.”

Across China hospitals have been overwhelmed by an explosion of Coronavirus infections since Beijing scrapped their strict lockdown rules.

China has been accused of not being forthcoming over what type of variant they have, and Brussels do not know as yet if there could be an explosive outbreak which was seen in late 2019 which then forced the UK into a lockdown in March 2020.

Health experts are concerned that there has been no sharing of data of any signs that Covid may have evolved sparking fears.