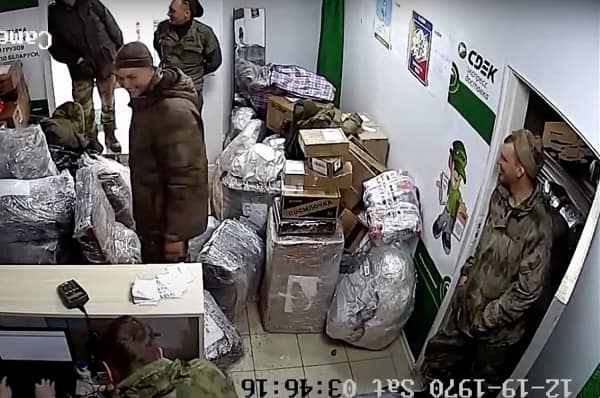 Russian soldiers are stealing the property of Ukrainians and are then sending the items back home to Russia.

President Volodymyr Zelensky said, they have been driven into poverty and lawlessness by their state for decades.

Russian soldiers are thieving anything of any value from Ukraine, as Moscow has now “decriminalized” looting and they will not “not incur any punishment for looting shops and residential buildings of Ukrainians.”

Zelensky said, “When they got to the war and entered the territory of a neighboring state, tens of thousands of Russian military were simply shocked by the normality of life.

“They were shocked by the cities and villages where people lived and did not live in poverty.

He said that Russia creates conditions of total poverty for their citizens, as they cannot afford even the simplest things: normal food, education, ordinary household appliances.

Military service for many Russians becomes the only social elevator and opportunity to get at least something in life.

President Zelensky said, “Almost immediately, Russian troops engaged in looting on the territory of Ukraine, in those regions where they could break into.

“They tried to take home to Russia everything that was of any value, from washing machines to computers, from auto parts to clothes.

“They just stuffed it into armored personnel carriers, trucks. They stole cars and tried to take out all the loot.”

He also spoke about recorded cases where Russian soldiers took out protective plates from their bulletproof vests in order to hide stolen laptops and tablets in them.

“It’s impossible to believe that a person is so poor from birth that he considers a laptop as more valuable than his own life in the war.

“But that’s what we saw on our land when the Russian army broke in,” Zelensky said.

He said the war in Ukraine is a clash of two different worlds, “The world of ordinary people who just lived a peaceful life, thought about the future and the world of people who have been specially humiliated by their state for decades, specially driven into poverty and lawlessness so that their power could be directed to any adventures, to any war against neighbors.”