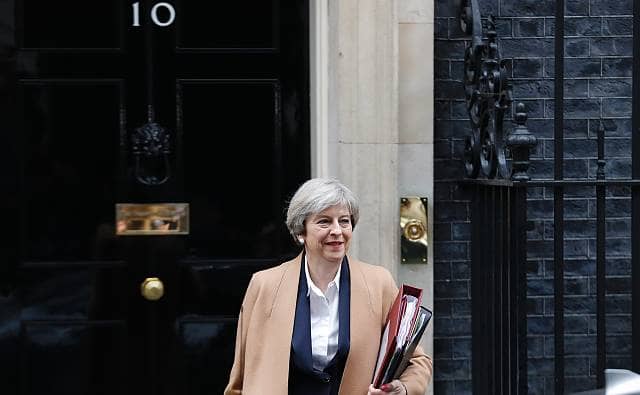 Theresa May meets the Queen to dissolve Parliament

Here’s what May had to say

The prime minister Theresa May Wednesday met with her Majesty the Queen at Buckingham Palace to formally dissolve Parliament ahead the 8 June general election.

May left Downing street and arrived at the Palace around 3pm.

After May gave her speech and said: “I have just been to Buckingham Palace for an audience with Her Majesty the Queen, to mark the dissolution of this Parliament.”

“The 2015 parliament is now at an end and in 36 days the country will elect a new Government and choose the next Prime Minister.

The choice you now face is all about the future.”

“Whoever wins on 8 June will face one overriding task to get the best possible deal for this United Kingdom from Brexit. And in the last few days, we have seen just how tough these talks are likely to be. Britain’s negotiating position in Europe has been misrepresented in the continental press.”

“The European Commission’s negotiating stance has hardened.Threats against Britain have been issued by European politicians and officials. All of these acts have been deliberately timed to affect the result of the general election that will take place on 8 June.”

“By contrast, I made clear in my letter to the President of the European Council invoking Article 50 last month that, in leaving the European Union, Britain means no harm to our friends and allies on the continent. We continue to believe that no deal is better for Britain than a bad deal. But we want a deal. We want a deep and special partnership with the European Union. And we want the EU to succeed.”

“But the events of the last few days have shown that – whatever our wishes, and however reasonable the positions of Europe’s other leaders – there are some in Brussels who do not want these talks to succeed who do not want Britain to prosper.”

“So now more than ever we need to be led by a Prime Minister and a Government that is strong and stable.Because making Brexit a success is central to our national interest. And it is central to your own security and prosperity. Because while there is enormous opportunity for Britain as we leave the European Union, if we do not get this right, the consequences will be serious.”

And they will be felt by ordinary, working people across the country. This Brexit negotiation is central to everything. If we don’t get the negotiation right, your economic security and prosperity will be put at risk and the opportunities you seek for your families will simply not happen.”

“If we do not stand up and get this negotiation right we risk the secure and well-paid jobs we want for our children and our children’s children too.If we don’t get the negotiation right, if we let the bureaucrats of Brussels run over us, we will lose the chance to build a fairer society with real opportunity for all.”

“The choice the country faces now is very simple. Because there are only two people who can possibly be Prime Minister after the 8th of June to negotiate Brexit.”

“It is a choice between me – and Jeremy Corbyn.”

“With me you will get strong and stable leadership, and an approach to Brexit that locks in economic growth, jobs for our children and strong finances for the NHS and the country’s schools.”

“Or you will get Jeremy Corbyn with a hung parliament and a coalition of chaos, shared by all. A Britain that works, not just for the privileged few, but for every single one of us.”