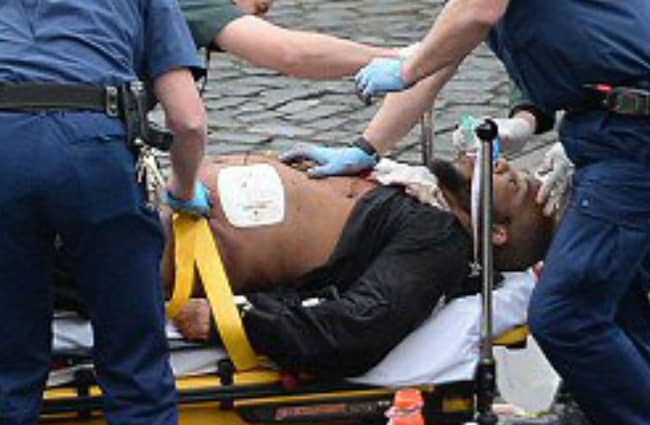 The first picture of the terror attacker, shot dead by police

The terror attacker dying after being shot

This is the terrorist attacker who ran over innocent victims on Westminster Bridge, then crashed his car into railings. He then ran into to the Palace of Westminster court yard with a 10-inch knife, he then murdered a police officer doing his duty defending our democratic state by stabbing him under the arm and in the back, the attacker was then shot and later died.

This is the first picture of the terror attacker on the cobbles of the Palace of Westminster being treated by paramedics who were trying to save the life of a murderer who almost gained access to the those at the seats of our democratic government.

The bearded suspect who is clearly being treated is lying on a stretcher with a large pad on his chest, most probably where he was shot by armed police today.

The terror attacker was driving a Hyundai 4×4 that is now known to be registered to Chelmsford, Essex.

The Metropolitan Police and security services are still trying to establish if the attacker was working as part of a group.

5 people have now died including the brave police officer, PC Keith Palmer and the attacker amongst those killed.

The investigation is ongoing and more will follow over the coming days.