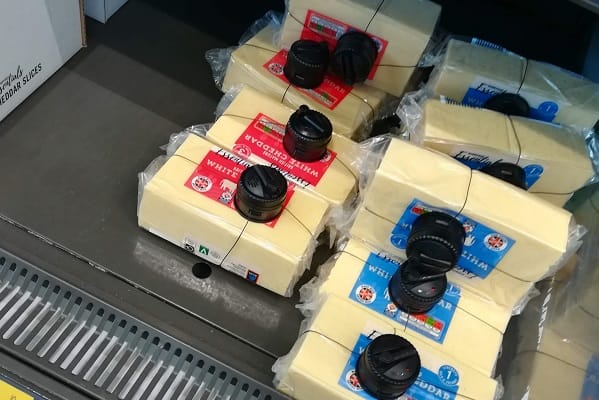 Tesco has been putting security tags on bottles of milk, tea bags, alcohol and sugar amid a surge in “thefts” over the cost of living crisis.

A shopper also spotted security tags on cheese and a pack of lamb chops in Aldi and the Coop.

Tesco Extra in Pool in West Cornwall said that they have seen a surge in thefts of milk as the cost of living crisis is deepening.

I went to get some milk this morning, I couldn't get my usual "discount", they've started putting security tags on the bottles. ☹️ pic.twitter.com/swW23xzlVk

A spokesperson for Tesco said that tagging milk is “not” policy and a customer reportedly heard a Tesco worker telling a shopper that milk is being tagged due to theft.

They told Cornwall Live, “I couldn’t believe it at first and thought it was some kind of joke or a mistake but I overheard a member of staff tell a customer that there had been a lot of thefts of milk and this was their way of trying to stop it.”

A shopper wrote on Twitter, “If you think Lurpak is bad – the local Aldi and Coop have started security tagging food.

Across the UK some supermarkets have been putting on security tags on packs of Lurpak as it has reached an all time high of almost £9 for a tub of butter.

Companies run by women are less likely to go insolvent...

Cash-strapped shoppers turn to smartphones in shops to look for...

Shareholders are trousering large dividends while those who do the graft are struggling, says GMB Union Almost 400 workers delivering food to KFC, Burger King, Pizza Hut and …