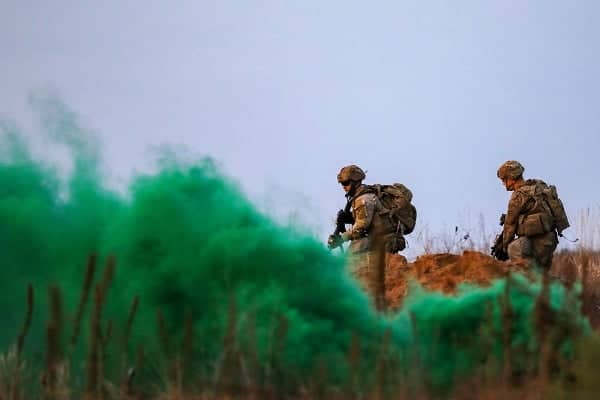 There are growing concerns that Vladimir Putin could escalate the war and send his troops to Lithuania to cut off the Baltic States from NATO.

Putin could send troops from the east and west of the Suwalki Gap which has been dubbed as “NATO’s Achilles heel” and is “the most dangerous place on earth” as the stretch of land of around 60 miles is the shortest land route to Russia’s state of Kaliningrad and Moscow’s de-facto owned Belarus, which is placed between Poland and Lithuania.

“The Suwalki Gap is a potential vulnerability as Kaliningrad and Belarus – now basically a military extension of Russia – could try to cut the Baltic States off from Poland,” Linas Kojala, director of the Eastern Europe Studies Centre told Sky News.

“We are afraid because if Ukraine falls, we have a big problem because the Russians will come to us from Kaliningrad and also from Belarus.

Lithuania’s government has warned that the “Suwalki Gap is a critical point” and while there’s no imminent threat of invasion, the risk remains.

Vaidotas Urbelis, political director of the Lithuanian Ministry of National Defence said, “We must be prepared all the time,”

“In the short term, I would say the risk and the Russian capabilities are lower, but the risk of escalation is higher and that’s why we have to prepare every moment for something to happen.

“We saw some concentration of Russian forces around us before the conflict.

“Now it’s less because everyone went to Ukraine… but even though the number of personnel decreased around us, most of the equipment is still here and the force needed is still here.”