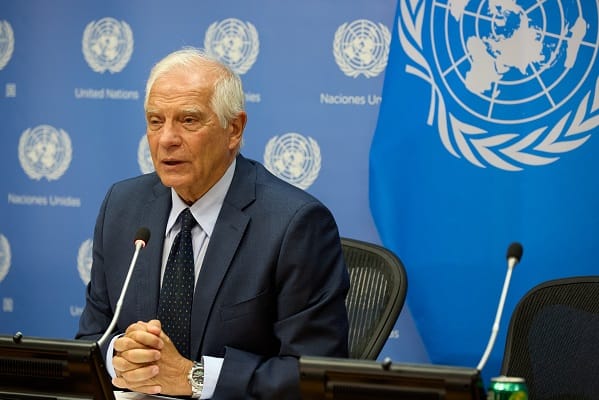 The EU High representative for Foreign Affairs and Security Policy Josep Borrell has warned on Monday that we are at “a dangerous moment” because the “Russian army has been pushed into a corner.”

Borrell said that Vladimir Putin’s nuclear threat must be taken seriously, but despite this the EU will continue to provide Ukraine with military support and will impose further sanctions against Russia.

Borrel told the BBC in an interview on Monday, “Certainly it’s a dangerous moment because the Russian army has been pushed into a corner, and Putin’s reaction – threatening using nuclear arms – it’s very bad … I’m not bluffing.

“When people say it is not a bluff, you have to take them seriously.”

Borrell also drew attention to the fact that the EU will continue to provide Ukraine with military support, and will further impose economic and personal sanctions against Moscow.

Borrell said, “We are not escalating.

“People tell me: ‘What are you going to do?

“The only answer I have is all the same: military support, economic sanctions, personal sanctions and diplomatic activity.”

He stressed that the war in Ukraine must be completed in a way which preserves the sovereignty and territorial integrity of the country.

Borrell added, “We will do whatever we can in order to finish the war. But the war has to be finished in a way that preserves the sovereignty and territorial integrity of Ukraine.

“Otherwise, we can finish the war, but we will not have peace, and we will have another war.”

The EU’s top diplomat said the weapons stocks across EU countries are “not completely depleted.

“May be, it was an exaggeration from my side. Depleted means zero.”

He continued, “We were not prepared for a war.

“We didn’t have a big stock of arms because we have peace in our minds, and that’s good … Our factories will be able to produce more.

“We will continue providing arms to Ukraine.”

He concluded, “In order to dance tango, you need two.

“This is certainly a worrisome direction, but we have to continue to support Ukraine.”