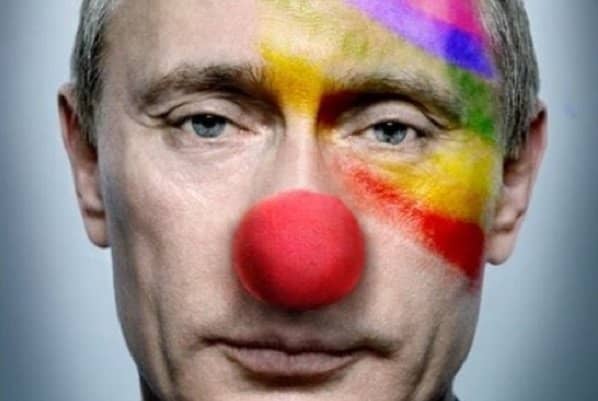 Russian officials at the embassy in Switzerland have taken offence after Vladimir Putin was correctly branded a “war criminal” with a picture showing the despot leader as a clown with LGBTQ rainbow painted on his face.

The Russian officials are “outraged” over the hilarious picture and have condemned the newspaper are are threatening legal action which will most likely amount to nothing.

The Swiss newspaper Neue Zürcher wrote the headline “Between Superheroes and Villains: The Power of Memes in the Ukraine War.”

They showed a picture of the Ukrainian President Volodymyr Zelensky in a Captain America suit alongside a very clever picture of Putin wearing a clown’s nose with rainbow colours on his face.

On the Russian embassy website in Zurich officials posted a letter showing their disgust and wrote to the editor-in-chief Eric Gujer, saying, “We are extremely outraged by the publication of an offensive cartoon depicting Russian President Vladimir Putin.”

The letter continues, “We believe that freedom of speech is in no way compatible with the freedom to spread insults and fakes. Recordings of Zelensky’s “extremely controversial performances… with an off-scale level of vulgarity” can be found online the Russian officials blasted.

The letter added, “As for the personality of the President of Russia, he is, as you know, a deeply religious Orthodox person and advocates the preservation of traditional Christian values ​​in Russian society (and he is clearly not a fan of the LGBT community)… Obviously, not everyone in the West likes this, where the ideas of the LGBT community are actively and forcibly promoted from the school bench.

“The expression ‘war criminal’ is also an unsubstantiated direct insult.”

Referencing Switzerland’s defamation laws, the officials added, we “reserve the right… to apply to the Swiss law enforcement agencies” regarding the Putin’s clown image and the rainbow paint.