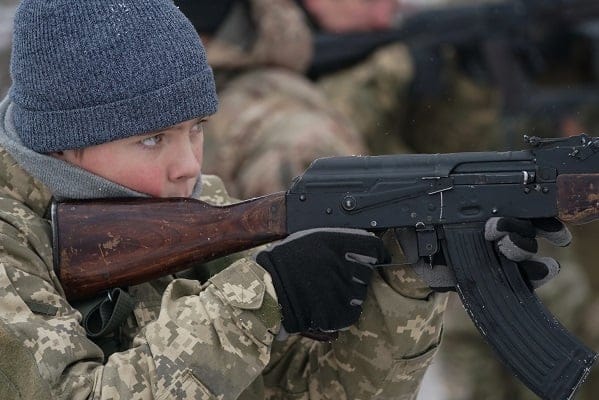 From 1 January Russia is reintroducing school children to be taught how to “get to grips with assault rifles” as Moscow returns to “soviet era school classes.”

Russia is bringing back “basic military training” for school children which is dividing opinion in the country.

BBC Russia correspondent Steve Rosenberg said that a mother had said that it is important to be “prepared for the reality of today.”

Another told Rosenberg that there should be “no place” for “basic military training” in schools which should be a place of “peace and happiness.”

Rosenberg reported, “Today’s Russian papers leave me with the distinct feeling that there are some people in power here who want to drag Russia back in time, back to the past.

“Under the headline, ‘Schoolchildren will get to grips with assault rifles’, Moskovsky Komsomolets reports on the imminent return of a Soviet-era school class: ‘Basic Military Training.’

“[Mr Komsomolets] writes: ‘The Defence Ministry has supported the introduction of military training in schools and colleges. Those who studied in Soviet schools well remember having to assemble and disassemble assault rifles at speed.

“‘Luckily in those days, schoolgirls were not allowed manicures. They had shooting practice and put on gas masks.’

“The paper said: ‘Parents are divided on the militarisation of schools. Muscovite Olga Turenko, who has ten children, believes that kids must be prepared for the reality of today.

“‘But Muscovite Galina says there is no place for basic military training and militarised physical education in the 21st Century.

“‘We must prepare our children, especially in school, not for war, but for a peaceful and happy life.’

“Well, there is little sign of that peaceful and happy life, not since Putin turned the world upside down by invading Ukraine.”

On Wednesday the Russian Education Minister Sergey Kravtsov said a “basic military training” course will be introduced in 2023 as a test.

He said, “It will be introduced in schools starting from the next academic year. Now it is being drafted and after January 1, it will begin to be tested.”