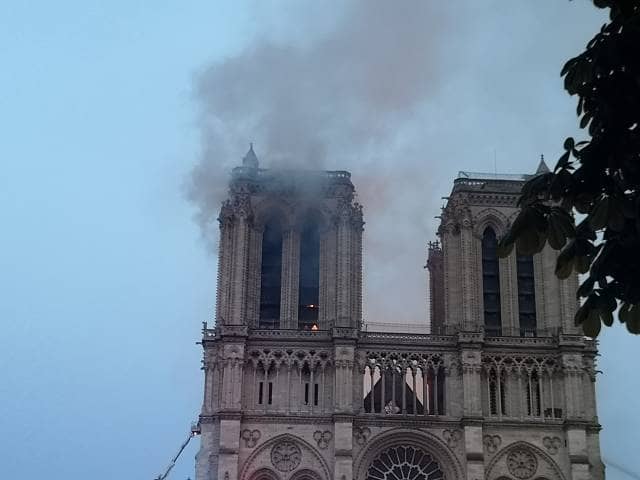 Over £300m has been pledged to restore Notre Dame

More than £300m has been pledged to restore Notre Dame cathedral, after a tragic fire ripped through the cathedral collapsing the spire and the roof.

Much of the cathedral is still standing and many of the priceless artefacts have been saved.

Finot told French broadcaster BFM Paris, “From what I could see, the stained glass had not been touched, the three beautiful roses that date back to the 12th and 13th centuries were still there, it’s a bit of a miracle, we are very relieved.”

The cathedral’s organ thought to be one of the largest in world was saved Finot said, “The organ has not been burned at all. It has suffered some damage because of the strong pressure of the water.”

Oil giant Total announced they will make a €100m donation. François-Henri Pinault French billionaire who is married to Salma Hayek a Hollywood actress has pledged to donate €100m towards the restoration.

Bernard Arnault a multi billionaire businessman who owns LVMH luxury goods empire said he will donate €200m toward the restoration of Notre Dame.

In a statement LVMH said, “The Arnault family and the LVMH group, in solidarity with this national tragedy, are associated with the reconstruction of this extraordinary cathedral, symbol of France, its heritage and its unity.

“In the meantime, the LVMH Group puts at the disposal of the state and the concerned authorities all its teams, creative, architectural, financial, to help the long work of reconstruction on the one hand, and of fundraising on the other hand.”

European Council president Donald Tusk called on member states to rally around, for funding and offers from around the world has poured in to help with the restoration.

French president Emmanuel Macron said on Monday night the “worst has been avoided.”

“We’ll rebuild this cathedral all together and it’s undoubtedly part of the French destiny and the project we’ll have for the coming years.

“That’s what the French expect because it’s what our history deserves.”

He added calling it a “terrible tragedy.”