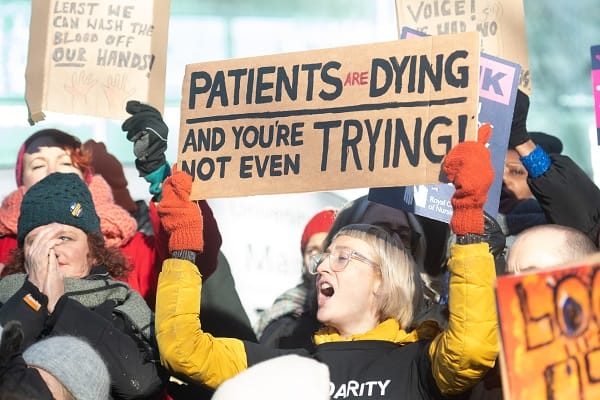 Ambulance staff are on another day of strike action and there is no end in sight of the pay row being resolved with the government.

North West Ambulance Service are warning the public that “resources will be severely restricted” and people are being strongly advised to only call 999 with life-threatening emergencies.

The Prime Minister said on Monday that he cannot “wave a magic wand” and give a pay rise and if there is to be a pay rise then that money will be taken from “elsewhere in the NHS budget,” which will mean “fewer nurses and doctors.”

Around 2,000 ambulance workers, which includes call handlers, emergency care assistants and paramedics started a 24 strike after midnight on Tuesday morning.

“Instead of talking about pay for this year to resolve this dispute, ministers are demonising us and belittling our efforts to save lives.

“The NHS is collapsing, yet we have been waiting two weeks today for another meeting with ministers.

“The only way to solve this dispute is a proper pay offer. We are waiting.”

On Monday, Rishi Sunak told ITV News, “Taking a step back, of course it would be lovely to be able to wave a magic wand and just give everyone what they were demanding when it came to pay.

“But my job as Prime Minister is to make the right decisions for the country, and they are, more often than not, not easy decisions.

“But that’s my job, and that’s what I will always do in this job, and… when you think about this, how would we pay for these things? Where’s the money going to come from?

“Actually, it’s probably going to have to come from elsewhere in the NHS budget, and that means fewer nurses, fewer doctors, fewer MRI scanners and CT scanners that are diagnosing people with cancer or indeed fewer mental health ambulances that we’re announcing today that are going to save people from going to A&E.

“My job is to balance all of those things and do what I believe is right for the country.”