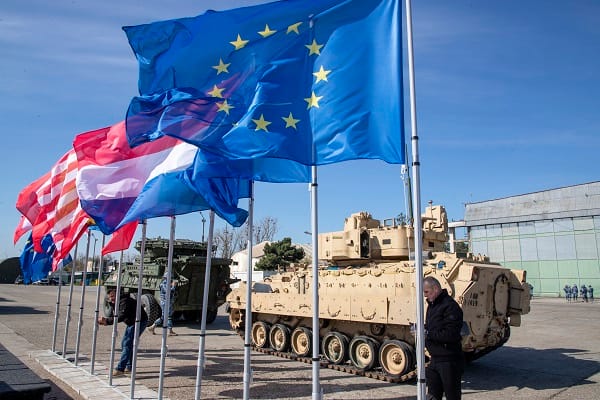 Moldova is now under attack by Russian forces as “two radio antennas were knocked out” on Tuesday morning and on Monday evening a series of blasts tore through the ministry of state security building.

The state security building was hit by grande launchers in the capital of Moldova’s breakaway region of Transnistria on Monday at around 6pm local time, Russia’s state news agency Tass reported, citing a local television station.

The ministry said in a statement, “In the early morning of April 26, two explosions occurred in the village of Maiac, Grigoriopol district: the first at 6:40 and the second at 7:05.”

The state security building which is in the self-proclaimed Transdniestria region had smoke “billowing out” of smashed windows.

The Moldovan Foreign Ministry have said that they are “concerned” as the Russian attacks are “straining” security in the Transdniestria region.

Explosions reported in Transnistria. What is the Russian-backed breakaway region in Moldova that could be the Kremlin’s new target? (in 2 minutes) pic.twitter.com/sRTAmDilOb

They said in a statement on Monday, “The aim of today’s incident is to create pretexts for straining the security situation in the Transnistrian region, which is not controlled by the constitutional authorities.”

Russian Major General Rustam Minnekaev said on Friday that “there have been cases of oppression of the Russian-speaking population.”

The Kremlin pedalled a similar justification for the invasion on Ukraine which started on 24 February.

State security HQ in Transnistria targeted in a hit-and-run rocket propelled grenade attack, a source in Tiraspol tells me. Transnistria is a pro-Russia, self-declared republic in Moldova with a long border with Ukraine. There are about 1,500 Russian troops stationed there. pic.twitter.com/fN4Msmy4Lz

The Moldovan government hit back at Minnekaev’s comments, they said they are “unfounded and contradicting Russia’s position in support of the sovereignty and territorial integrity of our country within internationally recognised borders.”

Defence analyst Professor Michael Clarke has drawn parallels between the Transdniestria region and the Russian-controlled Donbas.

He called Transdniestria “a mini Donbas of half a million breakaway Russians” which could threaten the stability of Moldova if Russia builds up their presence there.

He told Sky News, “It puts enormous pressure on Moldova.

“It would raise the question of whether Moldova would actually collapse as a country and Russia would have invaded two countries instead of one.”