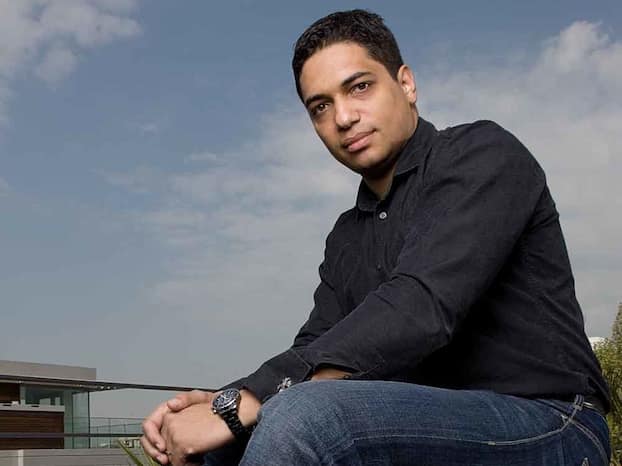 Meet Piers Linney, the new Dragon with plans to build a £500m business

Outsourcery founder Piers Linney is on cloud nine. Back in March, he replaced Theo Paphitis to become a Dragons’ Den investor. Come May, his cloud computing company Outsourcery listed on AIM with a valuation of £35m after raising £13m in from hedge fund billionaire George Soros and asset management firm BlackRock. The firm is a cloud-based IT and communications provider that offers services like email and communications hosted in the cloud and file sharing among others.

Linney, 41, set up his first business at 13 doing paper rounds in Manchester. He actually sold the business at a profit a few years later. After doing his A-levels and getting a degree in law and accountancy from Manchester University, Linney worked at City law firm SJ Berwin in 1995. He spent two years as a solicitor in the firm, but meeting exciting entrepreneurs and investors drew him to the financial world. So in 1997, he started working with Barclays de Zoete Wedd followed by Credit Suisse First Boston in 1998.

In 2000, Linney realised that business was his calling and he launched a string of companies including a pharmaceutical research company, Doctorsworld, and a music retail company, Trust the DJ.

But it was only in 2007 that Linney set up his most successful business yet. He and his business partner Simon Newton bought Genesis Communications from online mobile retailer The Link and merged it with another acquisition called Thus Mobile to become the UK’s largest independent mobile services provider. The duo then launched Outsourcery, the cloud arm of the business. Then in 2010, they sold the mobile business to concentrate on unified communications and the cloud. Outsourcery became their main business.

Linney’s success with Outsourcery earned him the chance to feature on Channel 4’s Secret Millionaire, where he spent time in a Young Offenders Institution working with prisoners, and went on to employ one in his company. He is a board member of the Cloud Industry Forum and has also been named one of the 100 most influential black Britons in Reuters’ The Power List.

Despite being a one-time City boy, Linney isn’t your average suit-wearing, golf-playing type. Mountain biking and going into space with Sir Branson’s Virgin Galactic is more his thing.

With the recent float, Linney’s aim is to make Outsourcery a £500m company. How will he do it? We ask him…

Q. Hi Piers! From being an accountant to a banker, you did a lot of well-paid jobs. So what made you leave it all and become an entrepreneur?

It was a gamble but I thought: I earn a lot of money now with City jobs, so I could earn much more with my own business. If you look at my background, my interests have been the internet, technology, telecom and finance. Look at Outsourcery, which we’ve created using all those skills.

Outsourcery is an embodiment of the way the internet has changed consumer technology. We’ve been able to grow the business very quickly because we are capable of doing this [kind of thing] in our sleep.

Q. Why did cloud appeal?

Mobile connectivity is the future, like 4G. But in terms of building a business, the growth potential of cloud business is more than the mobile business. The mobile sector has a 120% penetration and costs and prices are getting squeezed. Cash is king in our business and we want to be able to invest some of it in growing the business.

Q. How did you scale the business and do you think people understand how big cloud is becoming?

We decided that rather than building a small business and then adding people and servers, we will build a highly credible and scalable enterprise with a solid infrastructure. We built a business to scale and that came with a cost base. That’s why we had to put in a lot of money personally without external investors.

Now the traction we’ve seen in cloud is from big companies because they understand the benefit, and I think smaller companies will adopt it quickly only if [they] become aware of its availability. We’ve got a global tender to provide unified communications to Pearson Group, which is a FTSE100 company, and we also have relationships with various big companies like O2 and Microsoft.

Q. What are the key challenges you’ve faced in this business?

We’ve had to change a lot infrastructure and train people with the know-how, as we are very early into the cloud space. We spend the first three years extolling all the virtues of cloud – not many people were interested. So we had to go in there ourselves and prove the model.

The last couple of years it’s changed. Lots of people are entering the market to resell the cloud services. What they can’t do is invest the tens of millions that we do. If you started now, it’ll take you ages to make a company like Outsourcery. We’ve seen the market evolve but the next two years it’ll change as you’ll see the awareness of cloud growing.

For most companies it makes no sense to own ICT infrastructure. Why? If you think about a little company, they need to manage, update data centres, which is completely inefficient. With cloud you get more resilience in data centres [and] connectivity and security is much higher.

Q. Which companies do you count as competitors?

Our competition tends to be companies that tend to focus on only one product. After the market feedback we got, we worked hard to be the company which can replace a company’s complete IT and communications – everything. That’s our proposition: that you don’t need to go anywhere for anything. Our competition’s limited now and we expect that to change and that’s why we are working towards growing the company very quickly to get ahead of the market.

Q. Why did you decide to list on AIM?

For cloud you have to be credible, and being listed on AIM gives us a good governance structure. Also we’ve got to have good infrastructure because people want to know that this is sound business. Access to capital is also one of the factors. We are not trying to build a company that has £10m revenue, we want to build a company that has a £500m revenue. Cloud is about scale and if you’re not in the business to scale up, you’re in the wrong business.

Q. How are you going to make Outsourcery a £500m business?

Our core focus is the UK but we are slowly and surely building up and activating our partners – our larger partners are international businesses so we will look at international expansion in the future too.

Q. When do you plan to exit Outsourcery?

As a shareholder you always expect a return, so the others can go wherever they want to, but me and the other senior management – we are not going anywhere.

Q. Why don’t we see tech companies as big as Facebook or Twitter coming out of the UK?

I think personally in the UK there’s a fundamental issue with the way businesses are funded. Take us, for example: we are not a start-up, we’re not private equity. When we started out there weren’t many funds that were willing to talk to us, so Simon and I decided to fund it ourselves.

We built a business from zero, to probably £100m in the coming years, and nobody in the UK was ready to back it. I think in the UK, no one throws his or her weight behind businesses that are ahead of the curve. I think we need to change that.

Q. If Outsourcery started out in the US, would it be any different?

That’s a good question. I think it would have been a different story altogether. In the US, you find people who’ve built Oracle and Apple over so many years. Tech is a lot more respected there.

Q. What made you a millionaire?

It’s by the businesses I’ve owned and sold. I have done a lot of deals in corporate finance and hedge funds. I made money along the way, like selling Genesis. I used to rely on other people to back me but now if I want to invest in a business, I can do it myself. But I think my big ticket was building Outsourcery and now it’s on the stock market. I’ve only just started.

Q. How was it spending time in prison as part of Secret Millionaire?

It was a sobering experience. A lot of people there would be in a different place if they had a better start in life. Daniel, the guy I employed, he’s bright and capable we gave him an opportunity and he’s doing really well – he’s already been promoted once.

The experience was quite full-on. The days were long, the journey was very emotional and it was a hard 10 days. I’m glad I did it, but I wouldn’t do it again.

Q. How did Dragons’ Den happen?

The producers approached me and I was confused whether to take it up or not. Around the time, I was in South Africa with Sir Richard Branson and I asked him what I should do and he said, ‘You should go for it’.

It’s been a great experience – the filming is all done and it will be an interesting new programme. I think I saw over 100 pitches and some could go on for two hours if you like them. It was interesting to see the ideas people came up with.

Q. What kind of a Dragon are you – strict or easy-going?

I am me! You got to like me or you don’t. I am kind of technical and drill into details. But I am a people-person, and with these small businesses, that’s what you tend to be backing. They have to prove that they can sell a product.

Great, thanks for your time Piers!

Infographic of the week: How big is the cloud?