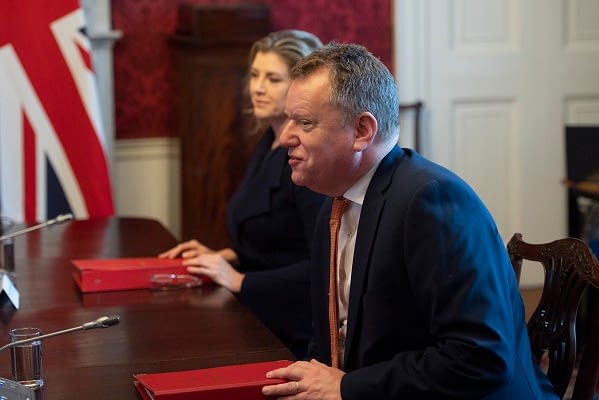 The Dail committee has been told by peers at the House of Lords that if the UK does trigger Article 16 of the Northern Ireland Protocol, then a no-deal Brexit is back on the table.

Lord Frost who is the UK’s Brexit Minister is set to make a statement today which may signal the suspension of the post-Brexit negotiations.

Talk of the suspension could result in a EU-UK trade war and which will most likely start retaliation from the EU.

Lord Jay of Ewelme, chairman of the House of Lords sub-Committee on the Protocol on Ireland/Northern Ireland warned that if Article 16 is triggered then the post-Brexit negotiations could put a no-deal Brexit on the table.

Lord Jay said, “I agree with you very much on what to say about the risks of Article 16 being imposed or being triggered and the response to Article 16 by the European Union, potentially leading to all the complicated negotiations with the prospect of a no-deal as the last stage. That is one end of the spectrum.

“The other end of the spectrum, which I think we can’t rule it out, and I certainly wouldn’t want to rule out, although I must say that the prospects are not looking brilliant at the moment, is for a negotiated settlement to be reached between now and Christmas or over Christmas.

“I don’t think we can rule that out.”

The Irish deputy premier also said that a suspension of the EU-UK trade deal requires a year’s notice.

This will spark further uncertainty for businesses in Northern Ireland, the Republic and the UK on post-Brexit checks on goods moving between the two countries.

Varadkar said, “I think that would be a big mistake. The uncertainty that was created by Brexit went on for years.

“I think it would be a big mistake for the British government now to reopen that uncertainty.

“I’d hate us to be talking again about a no-deal Brexit or a cliff edge, or any of those terms that we’d forgotten and almost stopped using.

“Any attempt to trigger Article 16, I think, would be bad news for business in Northern Ireland, here in Ireland and indeed in Britain.”

He fired a warning shot to Johnson and said that if the government does move to suspend the protocol, this will not end with a better deal.

“You were part of negotiating us you own it, it was hard-won.

Lord Hain, a former secretary of state for Northern Ireland, told the committee that, “If Lord Frost does announce the triggering of Article 16, that is a very aggressive and bombastic move by the British Government, that I … fear has been coming for a while.

“We’re going to need to work together with you parliamentarians across the Irish Sea to try and cope with the fallout because I think it’ll be significant.

“It seems to me that his (Lord Frost’s) negotiating stance under the Prime Minister Boris Johnson has pointed to the triggering of Article 16 and a confrontation, which in my view is not designed to solve the problem.

“It is designed to appeal to the Conservative Party’s Brexit base, which is a total and radical departure from the close relationship of trust that was painstakingly built over decades between Dublin and London.

“And given the tangled history of the two countries and the two centres, to destroy that trust is very, very serious indeed.

“We’ve got to do our best, if this transpires, and it’s already badly damaged that trust.

“If this transpires we’ve got to do our best to rebuild trust and strengthen it between ourselves, as it were, in parallel to what’s going on from London.”