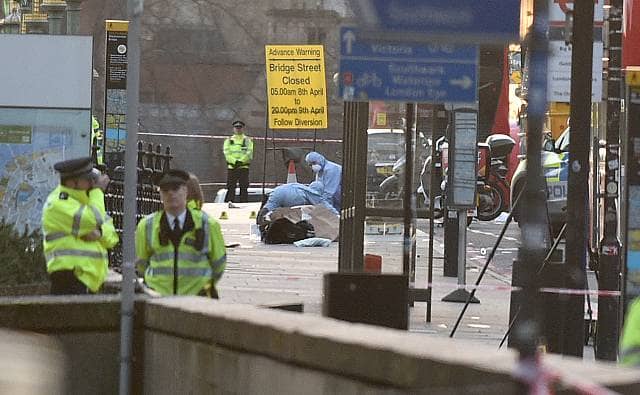 Forensic teams scour Westminster Bridge and the Palace of Westminster

Forensic officers are today scouring Westminster Bridge and the Palace of Westminster in the aftermath of yesterday’s terror attack in the heart of the capital.

A large blue forensic tent can be seen on Westminster Bridge along with many forensic officers in blue suits combing the whole scene.

Among the four innocent victims includes PC Keith Palmer who was murdered preventing a knifeman from entering Parliament.

Witnesses describing the scene yesterday said how they saw a man with a large knife and “plunge” the knife in to the police officer.

Rick Longley said: “A guy, someone, crashed a car and took some pedestrians out. They were just lying there and then the whole crowd just surged around the corner by the gates just opposite Big Ben.

“A guy came past my right shoulder with a big knife and just started plunging it into the policeman.

“I have never seen anything like that. I just can’t believe what I just saw.”

Speaking outside Scotland Yard, Deputy Commissioner Mark Rowley confirmed that there are still 29 victims being treated in hospitals across London.

He added: “Clearly our investigation is ongoing – developing all the time – and is focused on his motivation, his preparation and associates.”

“We must not allow terrorists to create discord, distrust and fear.”

“The police stand with all communities, later today a meeting of faith leaders will be held here at New Scotland Yard.”

“Whilst our work to investigate and understand what happened yesterday continues with vigour, we must also reflect.”

“I want to thank the public for their support and all their good wishes, I know it is appreciated by all those men and women who are out there today protecting us.”