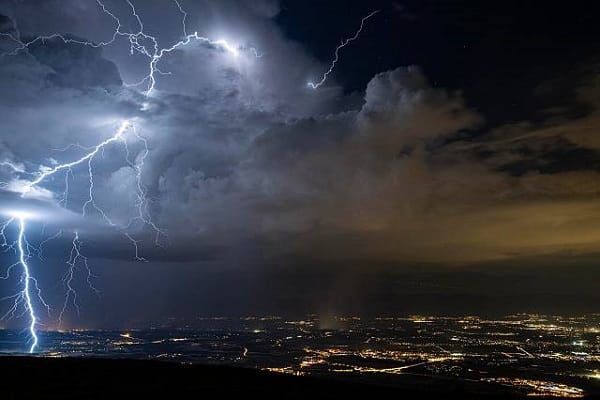 ‘Extreme weather’ with lightening could cause ‘power cuts’ this weekend

The Met Office have issued a yellow thunderstorm warning over the next three days in areas across England and Wales.

The Met Office have warned that due to the extreme weather there could be power cuts, damage to buildings, flash flooding which could close roads with cancellations of trains and buses.

The South of England and Wales could have the most rainfall with downpours between 30 to 40mm of rain in less than an hour, with frequent lightning, the Met Office said.

Neil Davies, Flood Duty Manager at the Environment Agency said, “Isolated thunderstorms could bring sudden surface-water and river flooding, which may lead to flooded properties and severe travel disruption in some areas.

“Further surface water and river flooding is also a possibility until Sunday.”

Met Office forecaster Matthew Box said, “Saturday will begin mostly cloudy for most areas across the UK but as the day goes on showers will start to break out in the South and South East of England.

“As the day progresses further there’s a chance of some rumbles of thunder and potentially some hail and lightning.

“The risk of thunder will start to push further north on Sunday, with central parts of England and Wales facing heavy rain and the chance of flooding.”