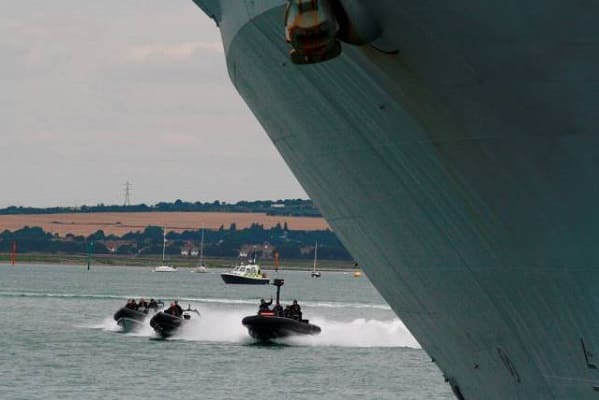 Prime Minister Boris Johnson is currently conducting a defence review which could be devastating for the British Armed Forces.

Defence expert Iain Ballantyne, editor of Warships International Fleet, claims that the Armed Force would be as much use as a “chocolate fireguard” if reports of the review is accurate.

Ballantyne suggested in an article in the Sunday Times that the elite Royal Marine Commando’s will be disbanded with other necessary services gone.

This comes as Johnson’s chief advisor Dominic Cummings is spearheading the review which will see resources being redirected to cyber-warfare, space and artificial intelligence.

Ballantyne warned, “Paper tiger Britain will be laughed at around the world by enemies and ignored by allies, while those dependencies that have seen it as offering security and succour will know it cannot be totally relied upon any more.

“Nobody will take such an under-funded, poorly equipped, ill-suited military seriously.

“When it comes to real defence, in peacetime crisis or wartime conflagration, the UK will be about as useful as chocolate fireguard.”

The British Army currently has 74,000 serving members, which could be cut to 55,000 which means the UK will not have the ability to contribute to a “coalition campaign” and will be weaker, with “imbalanced forces.”

He said, “In effect, the alleged proposed cuts would discard the UK’s ability to project conventional power around the world, abandoning the ability to rescue British citizens from war zones, while removing its best means of guaranteeing the delivery of Humanitarian Aid and Disaster Relief (HA/DR) into devastated regions.

“Or on the homeland front, to provide the NHS with offshore medical and logistical support to fight coronavirus if asked

“Gone also would be the British ability to contribute significantly to a coalition campaign on land, in the air or at sea, with the UK slumping to the status of a malformed military weakling with imbalanced forces, bloated at one end with nuclear missile submarines and strike carriers while being malnourished at the other, with hardly any tanks, ships, aircraft or troops.”

Johnson and Cummings could be taken “massive gambles” for the UK in being able to protect “British Overseas Territories.”

Ballantyne added, the government are “taking massive gambles by discarding whole capabilities, such cuts would, for example, remove the best options for reinforcing and defending NATO’s northern flank ashore at a time of rising Russian military presence in the Arctic.

“They would wipe away the ability to deploy rapid reaction forces to protect the many British Overseas Territories and enable Britain to pull its weight in elements of collective security.”

An MOD spokesperson who was asked about Ballantyne’s comments, said, “This Government has committed to grow defence spending.

“The MOD is progressing its contribution to the Integrated Review by planning how best to meet tomorrow’s threats within that increasing budget.”