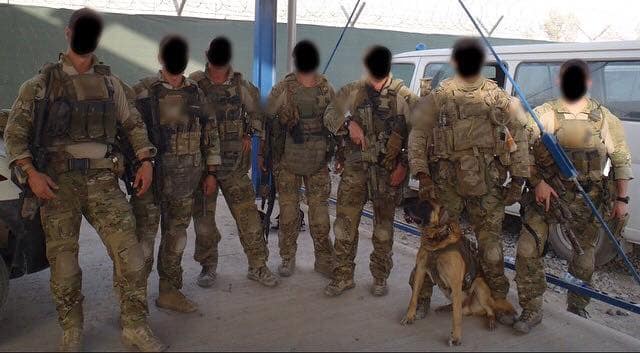 Crack members of the world’s elite fighting force, the SAS have shared operational photos, publicly on Facebook from the front line, which is believed to have annoyed top brass.

Once a soldier has passed the gruelling selection course the newly appointed wings and dagger SAS soldier must confirm to group policy.

TTP’s otherwise known as Tactics, Training and Procedures are most certainly off limits to the public, for the obvious reasons.

Source: ©SAS/Facebook It is believed these are the first photos publicy known showing dogs working with the SAS.

Each of the soldiers must also sing a disclosure agreement that prevents them from producing and or revealing any information publicly.

The page has been live since 2010 and more than 2,000 photos have been shared publicly on Facebook and has 21,000 followers.

The unknown group are wearing the new style of military DPM and are showing new weapons, mainly the new Colt assault rifles.

These chaps are sitting on the tail end of a Chinook helicopter.

a former SAS source that it is clear these photos show current serving soldiers, given the fact of their new boots, clothing and weaponary.

Source: ©SAS/Facebook However, this picture show a soldier by the Arc of Triumph in Baghdad that could date back to the early 2000’s.

A former SAS source said The Daily Start that: “The images on this site are current and genuine.

“Sometimes younger blokes want to see the profile of the regiment raised, but these guys have gone off-grid.

“The MoD have been looking at this and I predict it will be closed down.”