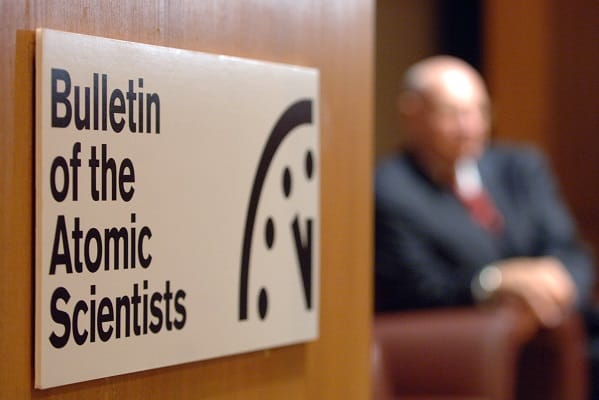 The Doomsday Clock which tracks the danger to humanity has been update on Tuesday from 100 seconds which was set in 2019, to 90 seconds to midnight.

This means the world is 90 seconds closer to an apocalypse and since 1947 when the Bulletin of the Atomic Scientists built the clock, it has never been closer to midnight as it is now.

Rachel Bronson, CEO of the Bulletin of the Atomic Scientists gave a grim warning, “The possibility that the conflict could spin out of anyone’s control remains high.”

In Doomsday Clock statement, it said, “Russia’s war on Ukraine has raised profound questions about how states interact, eroding norms of international conduct that underpin successful responses to a variety of global risks.

‘And worst of all, Russia’s thinly veiled threats to use nuclear weapons remind the world that escalation of the conflict—by accident, intention, or miscalculation—is a terrible risk.

‘The possibility that the conflict could spin out of anyone’s control remains high . . .. Russia has also brought its war to the Chernobyl and Zaporizhzhia nuclear reactor sites, violating international protocols and risking widespread release of radioactive materials.

“Efforts by the International Atomic Energy Agency to secure these plants so far have been rebuffed.”

The Russian Foreign Minister Sergei Lavrov warned on Monday they are now no longer in a “hybrid” war, and that Moscow is “almost in a real one.”

Dmitry Medvedev, the Deputy Chairman of the Security Council of the Russian Federation, warned NATO there is a risk of a “nuclear war.”

Mary Robinson, Chair of The Elders and former UN High Commissioner for Human Rights, said, “The Doomsday Clock is sounding an alarm for the whole of humanity. We are on the brink of a precipice.

“But our leaders are not acting at sufficient speed or scale to secure a peaceful and liveable planet. From cutting carbon emissions to strengthening arms control treaties and investing in pandemic preparedness, we know what needs to be done.

“The science is clear, but the political will is lacking.

Ban Ki-moon, Deputy Chair of The Elders and former Secretary-General of the United Nations said, “Today they are even closer to midnight, showing how much more perilous our world has become in the wake of the COVID-19 pandemic, extreme weather events and Russia’s outrageous war on Ukraine,’ Ki-moon said.

“Leaders did not heed the Doomsday Clock’s warnings in 2020. We all continue to pay the price.

In Doomsday Clock statement, it added, that they warned the last remaining nuclear weapons treaty between Russia and the US is “in jeopardy” and “unless the two parties resume negotiations and find a basis for further reductions, the treaty will expire in February 2026.

“This would eliminate mutual inspections, deepen mistrust, spur a nuclear arms race, and heighten the possibility of a nuclear exchange.”