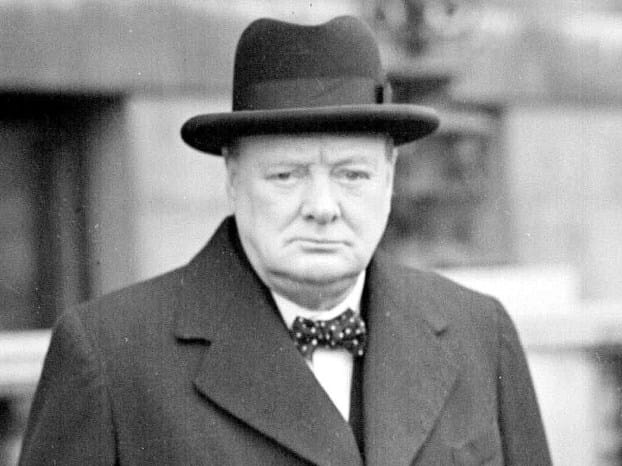 We need to believe if we are to succeed says the former CBI chief, let’s rally the troops like Churchill

In a much more important and vital way, Churchill gave Britain self-belief in those darkest days of 1940. Britain was completely alone, with few aircraft, a fleet somewhere at sea and with hundreds of thousands of our army retreating from France. Retreat, for whatever reason, was not something our nation was used to.

I imagine him sitting in 10 Downing Street, and thinking that, in a couple of months’ time, the Nazis were going to be over the Channel. His words, broadcast to the nation are familiar and are wonderful:

We shall go on to the end, we shall fight in France,

we shall fight on the seas and oceans,

we shall fight with growing confidence and growing strength in

the air, we shall defend our Island, whatever the cost may be,

we shall fight on the beaches,

we shall fight on the landing grounds,

we shall fight in the fields and in the streets,

we shall fight in the hills;

we shall never surrender

Churchill was trying to encourage a country that hadn’t been ready for this, didn’t feel it could do it, with its armed forces fresh in retreat off the beaches of Dunkirk, tail between its legs – and he had to persuade Britain that they had it in them to fight. And we were alone. No Americans, no Russians. We were utterly and completely alone.

He pulled it off. He got them to believe.

As did a famous England football manager, long before the multimillion pound contracts of today’s players. ‘You’ve won it once, now go out and win it again’, said Alf Ramsey to eleven tired, drained and acutely disappointed England footballers after ninety minutes of the 1966 World Cup Final. Victory had been taken from them in the last minute of normal time. Extra time beckoned. Exhausted, disappointed, but the players, inspired and full of renewed hope, delivered.

He pulled it off. He got them to believe.

Martin Johnson in that last minute of extra time in the 2003 Rugby World Cup Final, pulled it off. He got them to believe.

It is important in a Britain fit for purpose that we develop as a nation with self-confidence. A self-confidence not born of the arrogance of which we’ve always been accused. Because we were a colonial power, we were the old empire, we will always be accused of being arrogant even if we aren’t.

I think it’s more about self-confidence. How is it that Manchester United and Chelsea often win their matches in the last minutes of the game? It’s because they have this amazing ability to believe in themselves.

I am one of the directors and shareholders in Leicester Tigers. The team also wins many games in those final seconds because they believe that they can and, most importantly, they’ve done it before. They are confident in their ability. They are confident about handling the pressure. They look out for each other. The members of the team help one another. They lead each other on the field. They keep playing down to the final whistle. So many teams give up before the end, subconsciously but fatally believing that they can coast down to the final whistle. But the best teams know how to win in the last minute. They play past it.

Knowing how to win is part of this, having the confidence that it will come good in the end.

And our people will be living for a very long time

If you’re 20, you’re looking at a possible lifespan of another 70 years. Your children are going to find nothing remarkable about living beyond 100. There will no longer be telegrams from the King when you’ve done the ton, there might not even be telegrams at 110. People will want to work in their 70s and their 80s. They won’t do the same job, and may work part time, or they might want to do voluntary work instead, but they will want to be active and participative members of our communities.

This world today of the twenty-year old, and his or her child, is completely different from the world when I was serving behind the counter in Alvechurch, when I was fighting for business at the CBI, and even when I was going round the world banging the drum for UK trade and investment.

There are some things that this generation must do now if we are going to give the next one a chance. For the good of our country, this nation which saw off the Spanish Armada, Napoleon and Hitler; this nation which gave the world a common language; this nation which has a reputation around the world for being a bit slow, a bit patronising – but actually good to deal with, open and with a tremendous sense of fairness; we must give our children a future they can afford and, above all else, an education and the skills that equip them to deal with this very uncertain world.

We must ensure that our openness and our natural sense of tolerance is not abused, and not taken for granted. We must leave our children with a sustainable environment that can withstand the pressures of commercial energy and transport development which, in time, leaves us in a competitive state so that there will actually be an economy which we can be green about.

We must ensure that the nation’s faith in an elected parliament is bolstered by public acknowledgement of its supremacy and sovereignty over the unelected, unaccountable officials, commissioners and judges of the European Commission and Court of Human Rights. The pendulum must swing back to the centre and balance be restored, if a place where common sense and the wish of the people is to prevail. Let’s renew our confidence in ourselves.

We also need to make these future generations aware of where they came from, imbue in them an assumption of responsibility not just for their own actions, but also as part of this great nation. Great nations self-improve. We mustn’t be satisfied with where we’ve reached. We need to reach on and reach further – never settling for the now, but being restless for more success tomorrow.

Let’s release the talent of the nation.

We are not owed anything. Not respect. Not a living. Not a future. It all has to be earned. No escape, no blaming others.

This is just too important.

Remember, it wasn’t the Hun coming through the Ardennes Forest or the Scot coming over Hadrian’s Wall that did for Rome.

Rome did for Rome.

I don’t want that to happen to my country, our country.

Lord Jones was director general of the CBI between 2000 and 2006, and minister for trade 2007 to 2008. He is currently an ambassdor for UKTI, and has roles with JCB, Flybe, Jaguar Cars, Monetise and Babcock International Group. His new book, Fixing Britain – The Business of Reshaping Our Nation is out now, priced £9.99