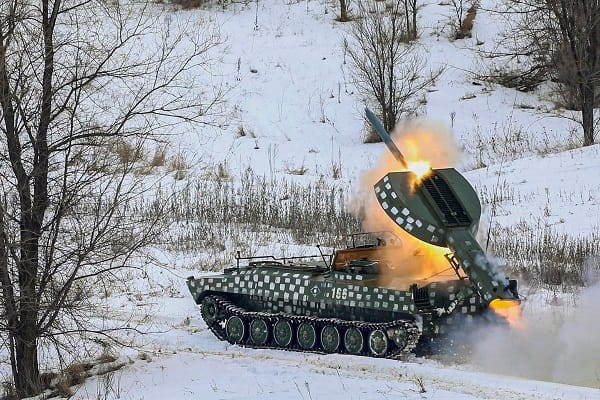 The British Ministry of Defence (MoD) has confirmed that despite calls for the Orthodox Christmas ceasefire heavy fighting continues around the town of Kremmina.

On Friday President Volodymyr Zelensky rejected Vladimir Putin’s calls for a 36 hour ceasefire which allegedly started at midday on Friday.

The Kremlin was accused of using the ceasefire to “continue the war with renewed vigour” as they will reposition their troops closer to vital points on the frontline.

President Zelensky said in Russian in a message to Putin that a ceasefire will only end when “your soldiers leave or we throw them out.”

President Zelensky said, “Those who continued the terror against our country and sent all those people of yours to the slaughter, rejecting our offers to stop the Russian aggression, certainly do not value life and definitely do not seek peace.

“Now they want to use Christmas as a cover to at least briefly stop the advance of our guys in Donbas and bring equipment, ammunition and mobilised men closer to our positions. What will this bring?

The MoD said, “One of the most fiercely contested sectors continues to be around the town of Kremina, in Luhansk Oblast.

“In the last three weeks, the fighting around Kremina has focused on the heavily forested terrain to the west of the town.

“With the coniferous woodland providing some cover from air observation even in winter, both sides are highly likely struggling to accurately adjust artillery fire.

“As is typical with operations in forests, combat has largely devolved to dismounted infantry fighting, often at short range.

“Russian commanders will highly likely view pressure around Kremina as a threat to the right flank of their Bakhmut sector, which they see as key for enabling any future advance to occupy the remainder of Donetsk Oblast.”

Kyrylo Tymoshenko, deputy head of the Ukrainian president’s office, said, “They talk about a ceasefire. This is who we are at war with.”