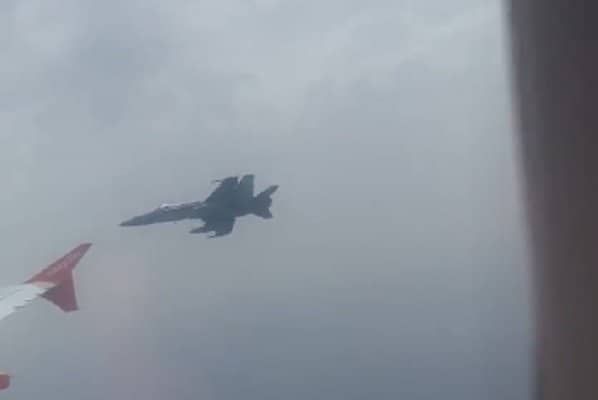 A British teenager has been arrested for making a “false bomb threat” onboard an easyJet flight heading from Gatwick to Menorca.

Following the hoax bomb threat a Spanish fighter jet was scrambled and footage shows the moment the pilot was tipping the wings ordering the easyJet pilot to “follow me.”

When the easyJet plane landed it was towed to a special area and local police arrested an 18-year old British tourist who is facing a fine of more than £50,000 for the hoax call.

A spokesperson for the Spanish Civil Guard said, “The Civil Guard has arrested an 18-year-old British national as the alleged author of a crime of public disorder in Mahon in Menorca.”

An @easyJet plane flying to the island of Menorca was intercepted today by F-18 Hornet fighter jets @EjercitoAire 🇪🇸 Apparently it was just a false alarm
pic.twitter.com/Zu8idmo1um

The British suspect was “identified on social media along with five other companions as witnesses.”

The spokesperson added, “They were taken to a police station so officers could clarify the situation.”

Aviation expert Julian Bray warned that the cost to scramble the Spanish fighter jet could cost “anything over £50,000” if not more.

The aviation expert told The Sun, “Plus, EasyJet could take civil action, so it could be very hefty.

“They will look for reparations for the cost of investigating the plane, the time spend on the ground, checking all luggage, scrambling a new crew and pilot and subsequent delayed flights.”