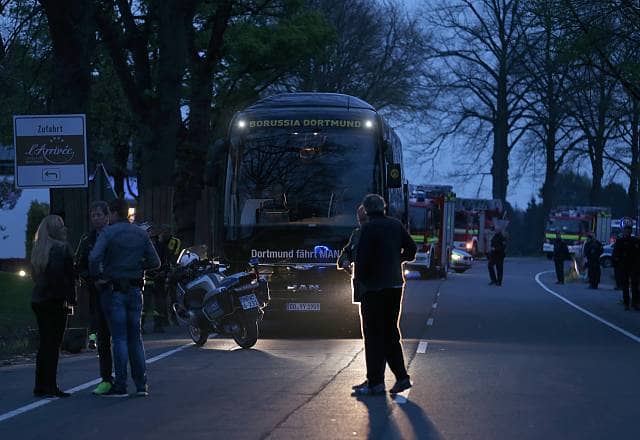 Police have confirmed a letter has been found at the scene where the Dortmund teams bus was attacked.

The letter mentions Islamic state in Syria and Germany’s involvement along with the Berlin Christmas market attack, according to Sueddeutsche Zeitung newspaper.

The newspaper further say’s that police detectives are investigating the possibility Tuesday nights attack was carried out by Islamic state or the letter could be a deliberate attempt to mislead the police.

Prosecutors are checking into the authenticity of the letter.

The three explosions happened as the players were leaving the L’Arrivee Hotel and spa. It is believed that the explosive devices were hidden in a hedge near to the car park.

Nina Vogt a police spokeswoman told ZDF television that the direction of the remains “open.”

“Of course, our investigations have to go in all directions to begin with.”

Defender Marc Bartra was taken to hospital after shattered glass from the windows injured his hand.

Reinhard Rauball the president for Borussia Dortmund said: “This is certainly a difficult situation for the team which, I think, has not experienced such a situation before,” said Mr Rauball.”

“However, we expect and I am confident that the team will do its best and deliver a spectacle in the Champions League this evening.”

Dortmund Police said in a statement Tuesday night: “In the run-up to the Champions League game between BVB and AS Monaco, there was just after 1900 tonight an explosion close to the BVB team bus.”

“According to what we currently know, the wheels of the bus (totally or partly) burst and one person was injured.”

“It is not yet possible to say exactly what the explosion was or exactly where something exploded.”

The police added that there is no threat to the stadium or the fans.