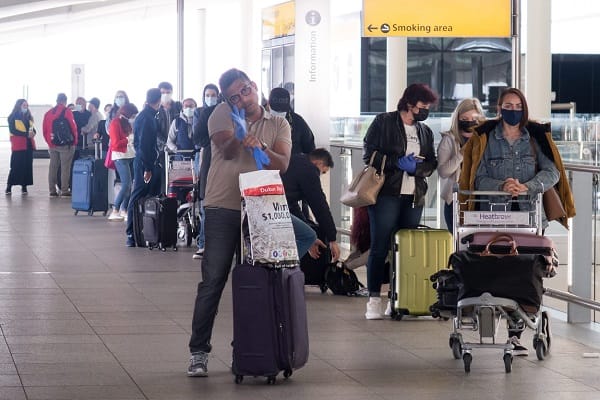 Tens of thousands of rail workers are on strike affecting travel and now Border Force are set to strike at airports across the UK which will affect thousands of flights for the annual Christmas getaway.

The Public and Commercial Services (PCS) union has announced a series of strikes over Christmas over pay, jobs and conditions.

Heathrow, Gatwick, Birmingham Airport, Cardiff Airport, Glasgow, Manchester and the Port of Newhaven will all strike on the 23, 26, 28 and 31 December.

Mark Serwotka, general secretary of the PCS union, said “this is a crisis” and that 40,000 workers “have no option” but to strike as they are using food banks.

There is a threat of job cuts and pension rules the PCS said along with conditions and pay and this is why they are taking industrial action.

The union chief added, “This is a crisis. We have tried for months to negotiate with the government and we have been ignored.

“We keep being told the government has an open door, but there is no point the door being open if there is nothing behind that door.”

A Heathrow spokesperson said, “Our priority is to ensure passengers get through the border safely and as quickly as possible.

“We are working closely with airlines and Border Force on mitigation plans for potential strike action by Border Force officers and these plans will now be implemented for the notified days.

“The Home Office advises that immigration and customs checks may take longer during peak times on strike days, and Heathrow will support Border Force to minimise these impacts with the aim of processing passengers through the border as efficiently as possible.

“Passengers are advised to check their flight status with their airline before travelling. We encourage all parties to resolve this dispute quickly.”

Rishi Sunak said during Prime Minister’s Questions (PMQs) on Wednesday that he vows to bring in “tough laws” to deal with “unreasonable” unions as tens of thousands of workers are on strike this month.

Sunak insisted that the government have been “reasonable” over public pay sector pay demands whilst the Labour leader urged Sunak during PMQs to do more over the ever growing wave of strikes.

The Prime Minister told MPs in the House of Commons, “Hard-working families right now in this country are facing challenges.

“The Government has been reasonable. It’s accepted the recommendations of an independent pay review body, giving pay rises in many cases higher than the private sector.

“But if the union leaders continue to be unreasonable, then it is my duty to take action to protect the lives and livelihoods of the British public.

“That’s why, Mr Speaker, since I became Prime Minister I have been working for new tough laws to protect people from this disruption.”