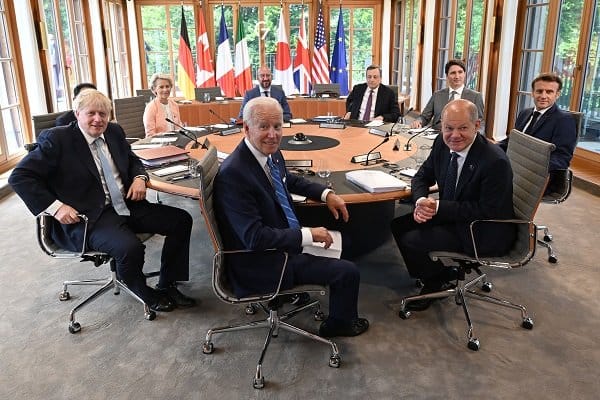 Over the weekend the G7 leaders made a laughing stock out of Vladimir Putin saying, shall we go “bare chested” riding, ridiculing Vlad the Invader over his infamous horse riding photo, but the Russian leader brutally mocked them back.

The British Prime Minister Boris Johnson brutally mocked Putin and said as he sat at the table, “jackets on? Jackets off? Shall we take our clothes off?”

Justin Trudeau the Canadian Prime Minister said, “Let’s wait for the picture,” to which Johnson hysterically said, “We have to show that we’re tougher than Putin.”

However the Russian leader has hit back after they mocked his bare-chested horseback riding photographs.

Putin hit back over the G7 leaders comments, he said, “I don’t know how they wanted to undress, to the waist or below the waist, but I think that it would be a disgusting sight.

“In any case, if you remember [Russian poet Alexander] Pushkin, I can make a mistake in the words in the details, but I think he said that you may become a man of business and think of beauty of the nails.

“So I definitely agree with that.

“Everything in a person should be harmoniously developed, both soul and body.”