Home Business News 2012 named best year of the past decade

2012 named best year of the past decade

The year 2012 has been named the ‘Best Year’ of the 2010s, according to a new survey commissioned by Association of Accounting Technicians (AAT)

The survey, which saw Opinium Research speak with 2,005 adults, saw 37% of Britons name 2012 the year of the Queen’s Diamond Jubilee and the London Olympics as the best year for Britain since the start of the decade. 2011, the year in which Prince William married Kate Middleton, was named the second best year (14%), followed by 2013 and 2016 (12% each).

Meanwhile 2017 was named the ‘Worst Year’ for Britain over the past decade. The year, voted the worst by 31% of those surveyed, saw Britain return to a hung parliament while both Manchester and London were rocked by terror attacks. 2016, the year of the EU referendum, was named ‘worst year’ by 19% of respondents, while 16% said that 2010 was worst for Britain. 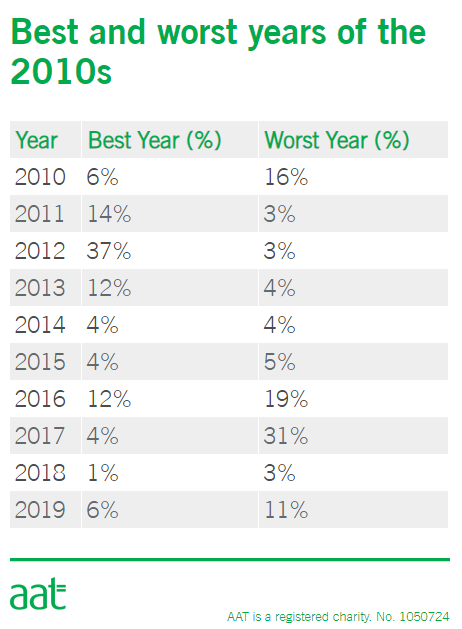 Andrew Williamson, Director of Marketing and Commercial, AAT said,“The fact that the top two years for Britain in the past decade contained significant events affecting royalty – in Prince William’s marriage and the Queen’s Diamond Jubilee – suggests that the Royal Family’s national popularity endures. However, the golden fortnight of the London 2012 Olympics saw Britain’s star shine brightest, and perhaps did more to bring the country together than any other single event.

“It’s interesting that 2016 was ranked in both the best and worst years of the decade, presumably depending on the stance of those surveyed related to the EU referendum that year. As we now move into a new decade, it’s a moment for Britons to consider how they wish to develop both personally and professionally, to keep pace with the changing world around them.”