Home Business NewsBusiness Why was Stephen Fry walking a sheep over London Bridge? 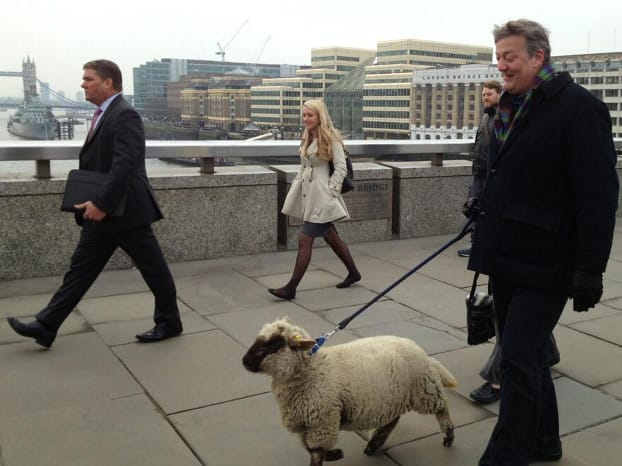 Why was Stephen Fry walking a sheep over London Bridge?

Stephen Fry certainly wasn’t feeling baa-shful this morning as he took to London Bridge with a sheep in tow.

As one of the long-held historical rights, a Freeman of the City of London can “drive sheep and cattle over London Bridge”. It has only been exercised on occasion in modern times, with one of the last occasions being 2008 when Lord Mayor of London Alderman Ian Luder drove a flock across the bridge to raise funds for charity.

He was nominated by the Red Cross International Fundraising Committee, in recognition of his career and support for a variety of good causes.

Fry is ahead of the herd then, in keeping the City’s tradition alive.

A shot of Grace the lamb, Doris and me twitter.com/stephenfry/sta…

As bemused onlookers took to Twitter to wonder at the sight of the actor and his sheep, they pondered whether the wool was being pulled over their eyes.

When you pass @stephenfry taking his sheep for a walk over #LondonBridge you know it’s going to be a strange day! twitter.com/Scottsman1978/…

One thing is for sure – ewe don’t see that every day.