Home Lifestyle NewsArt & Culture News Why did Coke put your names on its bottles? De-branding is the new branding 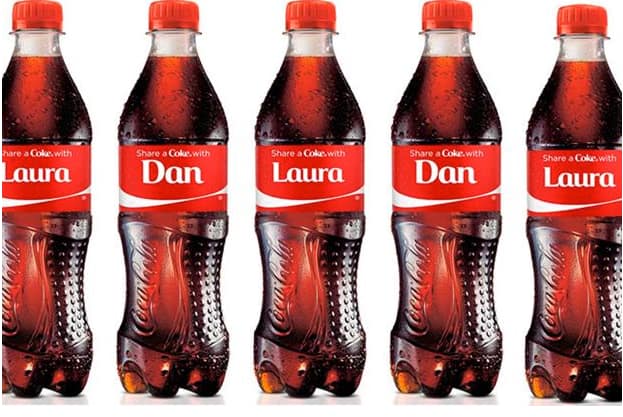 Why did Coke put your names on its bottles? De-branding is the new branding

Coke’s summer campaign to personalise their bottles was a resounding success, consumers absolutely loved it. For some reason, no matter how popular your name might be, we can’t resist something with our name on it. It’s a beautifully simple but highly effective method of reaching out to individuals and saying “hey, this is just for you”. It even felt a bit strange drinking a coke with someone else’s name on it.

Results for Coke’s campaign indicate overwhelming success for the brand. Consumption by the young adult market, their key audience for the campaign, increased significantly, up by 7% and traffic on the Coke Facebook site increased by 870%. The hashtag #sharacoke led to thousands of people tweeting a picture of their very own Coke bottle.

The ‘Share a Coke’ campaign is just one example of the rising trend for big brands to de-brand and individualise their product to entice engagement. When brands get to the top of their game there is much less need for overt branding and instead a move towards creating experiences can be employed, which is often far more effective.

In June this year, Heinz created an app which enabled consumers to design their own look-a-like bean. The results speak for themselves – 30,000 Facebook fans and 10,000 shares in just two weeks.  Convinced by the efficacy of personalising the brand, HP took the concept further and offered 100 people the chance to win a personalised HP Sauce bottle to celebrate Father’s Day.

The latest example has come from Edrington’s ‘The Famous Grouse’, which has given consumers the power to personalise a bottle of the whisky. This has been launched at the perfect time of year when shoppers are seeking Christmas gifts for friends and family that are a bit different and offer that extra special personal touch. Supporting activity on Facebook has enabled the brand to take a traditional drink and through personalisation appeal to a younger and wider audience.

These clever campaigns have really caught the attention of the public. However, likewise some brands have seen the strategy backfire. When Tesco launched the Harris + Hoole chain of coffee shops, many consumers felt misled by what they thought was an independent, community-based shop, when it was in fact funded by a global corporation that is aggressively setting up outlets all over the country.

Therefore, where’s the line between savvy branding and duping the consumer? And when is it okay to hide your logo?

There’s a difference.  It’s one thing to create a fun, standout campaign where a logo is simply replaced with a name and misinforming the public and leading them to believe in something that doesn’t really exist. It’s important for brands to stay fresh and try new ventures, but they also need to stay true to themselves and remember what their brand represents.

It’s interesting how Coke, one of the biggest brands in the world, put people’s names on their bottles and we all get excited but Tesco invests in a family of young entrepreneurs to open a chain of coffee shops and we’re up in arms about it. Transparency is clearly the name of the game. Don’t try and hide who and what you are. The public are savvy and don’t like being played.

So personalisation and individualisation works but only when applied with transparency. The whole point of personalising a brand is that consumers get to own a part of it, they’re made to feel special – it’s an honour to be part of that brand. If you hide behind a facade and pretend you’re something you’re not this detracts from the whole point of your brand and in the end can lead to negativity and disengagement. We’ve seen that de-branding can work and with great results but only if the brand ensures it stays true to its core proposition.

Mark Howley is the managing director of Zenithoptimedia UK. Mark joined ZenithOptimedia in 1999 and has a wealth of experience across most advertising sectors, including automotive, financial services, entertainment and FMCG. Mark’s particular interest within communications is the area of marketing effectiveness and ROI.
He was recently promoted to Group Managing Director, of ZenithOptimedia’s UK operation.