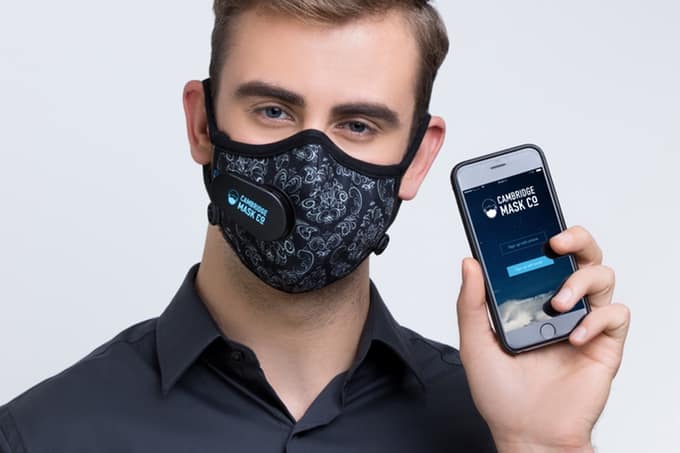 Air pollution kills seven million people per year according to the WHO, more than murders, suicides and car crashes combined, someone every four seconds. Over 9,000 Londoners died prematurely due to pollution in 2015, and premature deaths in the United Kingdom have reached 39,730 according to the European Environment Agency.

This is from a combination of tiny PM2.5 particles, nitrogen dioxide and ozone pollution. In the UK, air pollution has become a major source of concern for many, as cities across the country frequently breach WHO and EU pollution limits. Research now shows that the average UK resident has a six-month shorter lifespan due to air pollution.

Now an innovating British wearable-tech company, have come up with a solution to combat pollution-related deaths in urban residents around the world.

The Cambridge Mask Company have just launched the world’s first ‘Smart Mask’. The mask has three high-tech filters that were created by the British military for use in chemical, nuclear, and biological attacks and treated with silver to even absorb and kill viruses and bacteria, and to prevent the inhalation of other gases such as toxic nitrogen oxide, that is produced from diesel fumes.

Christopher Dobbing, the founder and CEO of Cambridge Mask Company, said: “We are helping to solve the fundamental requirement for people to better understand what and how they breathe.

“Our current masks have been a massive success and we now have users in over 40 countries. With this new technology, we are making our masks even better, and giving people awesome tools to care for their long-term health.

“The pollution crisis is not just a problem for third world cities.

“People in London are dying in the tens of thousands every year because of pollution – often caused by car exhausts. These deaths are preventable and the Cambridge Smart Mask ensures that cyclists, runners or simply London residents can monitor exactly what is in the air and ensure that what they are breathing is clean and safe.”

Dr Tomaz Slivnik, a Cambridge resident, said: “I found wearing a mask in public a little odd at first

“I travel frequently and used to get sick a lot. Now I wear the masks on the flight and have not picked up a bug since I started using it. I am really looking forward to trying out the smart mask”

The bluetooth sensor in the valve measures the wearer’s breathing patterns and tells them when they need to change the filter. The mask connects to an app on your phone that actively monitors the air quality index (also known as AQI), telling the user when the air may be hazardous and they need to put on the mask. The app has a family feature that allows the main user to register their family members’ masks too.

The masks are aimed at urban residents who are exposed to higher air pollution levels as well as cyclists, allergy sufferers and those with low immune systems or chemical sensitivities.

The Cambridge Mask Company creates a range of adjustable masks, there are five sizes that fit from age 2+ and come in an array of colours and designs to give customers a wide choice of styles.

The company is aiming to raise £25,000 ($32,000) to take the concept to market. The development has taken nearly two years, with prototype and patent already developed.