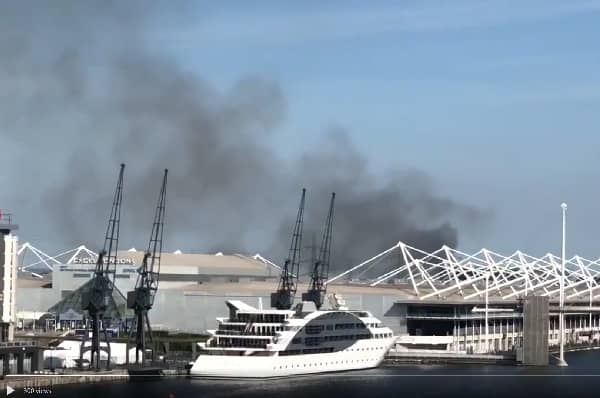 Smoke has been seen rising above the new 4,000 bed NHS Nightingale at London’s ExCel centre, which has recently been turned into a hospital.

Smoke was seen shortly before 3pm on Tuesday, and people have posted video’s on social media, it is unclear if this is the hospital or something burnig near by.

a rather large fire behind the excel nightingale hospital pic.twitter.com/pvmzL2fqks

People on social media question whether a fire had broken out near the site of the converted Nightingale Hospital or at the ExCel.

Michelle said on Twitter, “We are the other end of Excel & it stinks of smoke here… must be bad. Sky News helicopter is flying above too.”

We are the other end of Excel & it stinks of smoke here… must be bad. Sky News helicopter is flying above too.

A person wrote on Twitter, “A rather large fire behind the excel nightingale hospital.”

Another said, “Looks like there is a fire close to Excel / NHS Nightingale.”

Last week the Nightingale hospital was opened by Prince Charles via video link, with Matt Hancock, the military and other staff members.

The Prince of Wales called it a creation an “unbelievable feat of work.”

A London Fire Brigade spokesperson told LondonLovesBusiness on Tuesday, “Four fire engines and around 25 firefighters have been called to a fire at a garden on Brandreth Close in Beckton.

“Part of the ground floor and first floors of a pair of semi-detached houses are alight. A number of wooden sheds at the rear of the properties are also alight.

“The Brigade’s 999 Control Officers have taken 43 calls to the blaze.

“The Brigade was called at 1449. Fire crews from East Ham, Barking and Plaistow fire stations are at the scene.”

The new NHS Nightingale Hospital, at ExCel Centre in London Docklands, was not affected.