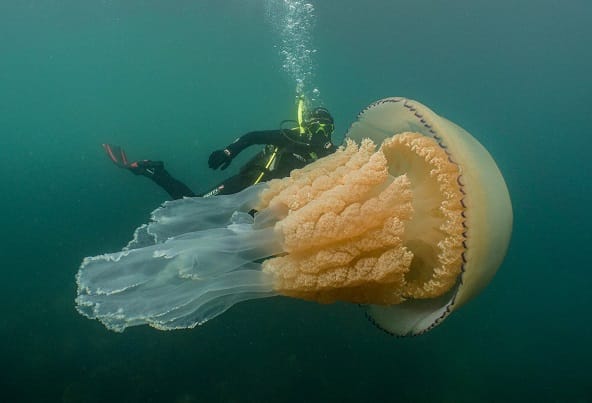 Watch: Divers swim with ‘giant Jellyfish’ near the coast of Cornwall

Daly told the PA, “I turned around and noticed Dan was filming something and did a double take… It was enormous.

Wild Ocean Week which is an event celebrating the UK’s ocean wildlife has seen the pair travel around the UK coastline raising money for the Marine Conservation Society (MCS).

Daly said, “In seven days we came face to face with seals on the east coast, breaching whales up in Scotland and mega pods of dolphins.

She added, “Nature threw us a bit of curveball.

“The best part about it is it’s picked up a lot of attention and people are now looking to UK coasts and thinking ‘we have that… how amazing’.”

Daly said barrel jellyfish are “not that rare” and are often described as being “dustbin lid sized.”

“The initial moment of seeing it was pretty mind-blowing.

“We both surfaced and let out a massive cheer.

“I think sometimes we don’t realise there is this amazing marine wildlife in the UK, but it’s out there and all you’ve got to do is go and find it, she said,

If you're not a fan of jellyfish, look away now…
Biologist @LizzieRDaly found this giant as part of #WildOceanWeek#marinelife #oceanlife pic.twitter.com/fx2Xn21V7e

Russian missiles blow up a shopping centre with more than...