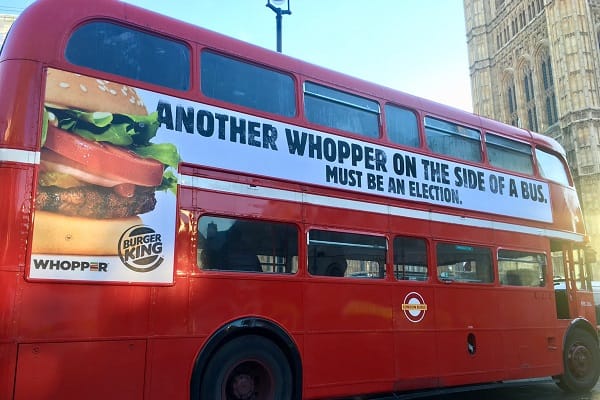 The new Burger King advert that mocks the Vote Leave Brexit battle bus has gone viral on the internet.

The Burger King advert says, “Another Whopper on the side of a routemaster bus. Must be an election” which can bee seen on the side of London busses.

The advert mocks the claims that appeared on the EU Referendum’s bus that said the UK spends £350m a week to the EU, Boris Johnson said this could be used on the NHS.

A spokesperson for Burger King said, “As the Home of the Whopper, we felt that if anyone has the right to stick whoppers on the side of a bus, it’s us.

“So naturally, we’ve taken the opportunity to shine a light on our iconic Whopper in all its flame-grilled glory.”

The advert has been a hit on social media, one person said, “I’m voting Burger King for Prime Minister.”

Another added, “Angry gammon burger anyone?”