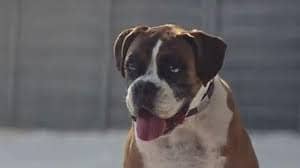 Be prepared to get wowed

Buzz, the boxer from Newton Abbot, is wowing the world by copying the dog in the latest John Lewis advert.

A video posted of Buzz jumping much like the dog in the advert has gone viral getting over 300,000 hits already.

Owner Neil Montadon later told the Torquay Herald Express: “It’s crazy and to be honest we are a bit scared by it all.

“We only put it up for a bit of fun. Jumping is normal behaviour for boxers and he does it all the time so we were ready with the phone to film him. We kind of knew how Buzz would react.

“He’s crackers. They say dogs can’t see the TV but they obviously can.”