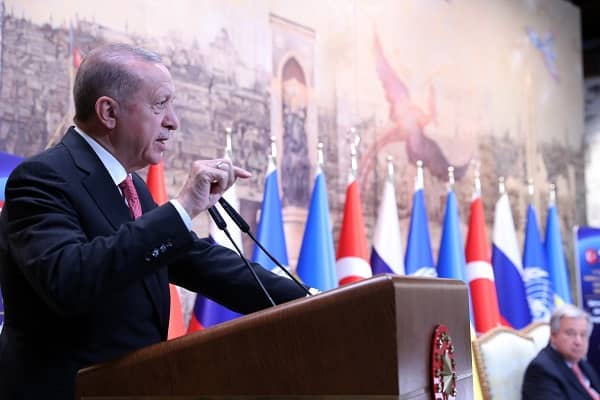 Turkish President Recep Tayyip Erdoğan and the United Nations Secretary-General António Guterres to visit President Zelensky in a high profile meeting to ‘discuss steps that can be taken to end the war.

This comes after Vladimir Putin’s Kremlin aide “secretly contacted” the CIA and MI5 in London to negotiate a way to end the war.

The Kremlin official has betrayed Putin by secretly discussing the ongoing war with the West and the Russian elite has been dubbed as “one of the pillars of the regime.”

A document seen by the Mirror said, “A representative of Putin’s inner-circle sent a signal to the West about the desire to negotiate.

“The mood of the Kremlin elite is panic.”

The high profile meeting between Erdoğan and Zelensky which will take place in Lviv will be to discuss “steps that can be taken to end the Ukrainian-Russian war through diplomacy.”

This will be the Turkish President’s first visit to Ukraine since the war started along with the UN Secretary General.

CNN Turk said, “The meeting will discuss steps that can be taken to end the Ukrainian-Russian war through diplomacy, by activating the mechanism created to export Ukrainian grain to world markets.”

The Milliyet publication said that during Erdoğan’s visit, aspects of Turkish-Ukrainian relations at the level of strategic partnership will be assessed.

The UN Secretary-General António Guterres will travel to Lviv on Thursday, to meet with the Ukrainian and Turkish Presidents.

The Kremlin elite who contacted the Western security agencies did so over grave concerns that fighting is takingplace next to Europe’s largest nuclear power plant which could explode if it took a direct hit from a missile.

The head of the UN’s nuclear watchdog warned Europe is facing a “grave hour” which prompted the Kremlin official to break ranks putting his life and that of his family in extreme danger.